1974
5. 3 / 18 Gaudrons Road Korora via Coffs Harbour NSW 2450
Phone : 61 02 6653 6536   email : dafin @ key.net.au
John Blanch, Billy Urbany (USA), Chris Horne ,
Design
Amoung the early manufacturers Scott Dillon was considered the master in big wave guns (closely
followed by Les Patterson at Dale Surfboards - Bob McTavish/Pods for Primates Part 1).
Consistent high standards of manufacture are evident in boards from all eras and the Scott Dillon
Surfboard Collection has many fine examples of professional restoration.
Many commentators have  noted the use of various fin designs and particually the quality of fin
construction.
Decal design  'developed' from O'Neill Surfboards/Wetsuits, Santa Barbara California.
Developed first Australian use of rice paper decals, circa 1959.
Experimented with factory neighbour, Jim Ilsaft? of Itmas Printing who was  producing books for the
religious market. The early results, using quaily Bible paper, encouraged the company to specialize in
surfboard decals under the brand Jim the Printer.The company went on to be a major supplier to the
industry well into the 1980's.
One of the Brookvale Six - Sydney manufacturers with national sales and reputation in the ten years 1962 to 1972.
da fin  - swim fin with control blades, somewhat related to Thruster fin, circa 1995.
Catalogue Entries 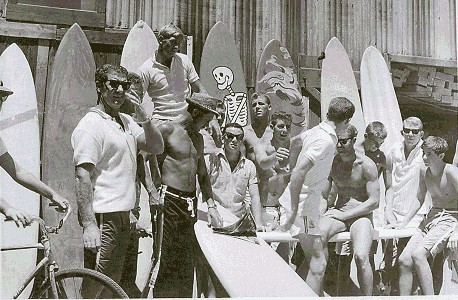 Caption Notes by Scott Dillon, Photograph : Possibly Peter Reddan, Jeff Andrew collection.
Australian Longboarding Magazine, November - December, 2005.
Number 42 Page 79.
"The year was 1956, when I was in partnership with Noel Ward.
These photos show the old Bondi Factory.
It was situated in the lane behind the church in Bondi Road, with the lane entrance in Wellington Street.
It was no more than a large garage and opposite the Boy Scouts shed in the lane.
We were only there about six-eight months when Noel decided to start making boats, so I moved over to Brookvale and rented a shed behind Hardward & General in Winboume Road.
"The guys from left to right are Jack 'Bluey' Mayes (deceased), Johnny Wheels' Williams (now living in Hawaii), Scott Dillon with hat (Coffs Harbour), Johnny Donovan, in sunglasses, Darryl Eastlakes, at rear, Andy Cochrane (now living in Hawaii), and Noel Ward in sun- glasses (deceased).
"The surfboards. ..the Skeleton board belonged to Darryl, both it and the Dragonboard were painted by my sister, Helen Evans, who lives at Cronulla and is a top marathon swimmer at 73... still competing at the moment in Fiji.
The surfboard with 'B.R.' (faintly visible on second board from the right), belonged to Barry Ross, who unfortunately died after falling off the cliffs at South Head coming back from a day of spearfishing.
"The balsa, seen in the rafters of the shed, was the first balsa brought into Australia by Arthur Milner.
The boards on display were coolite boards, glassed with epoxy resin and 16oz glass, with 50z cloth to finish with.
"It was in this shed that Noel Ward and myself manufactured the first roof racks in Australia that fitted in the gutters of cars.
We sold dozens until approached by an outlet to purchase several hundred racks.
We laughed at the offer and sold them several racks we had. We had never patented them and several months later someone else had them on the market ..we were young and stupid."
The guys who stole Scotty and Noel's roof-rack idea might have ended up wealthy, but it's hard to imagine they lived a life as rich and full as these Bondi surfers shared in the '50s and '60s. 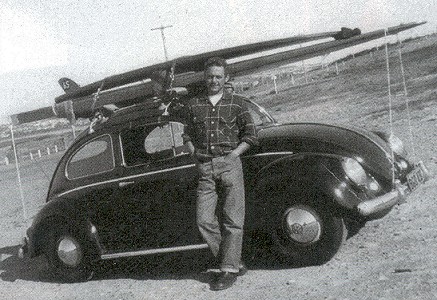