A Brief History of the Twin Fin
circa 1943
The earliest documented twin fin surfboard is probably a model built by Tom Blake, possibly in Hawaii, circa 1943.
See cropped image, below.
The uncredited photograph is currently the only known evidence. 1948
Probably unaware of Blake's examle,  Bob Simmons in California developed a multi fin design in 1948.
He only manufactured a small number of his  long based Twin fin model but, like most of his innovations, the long term impact was considerable.
The design was certainly influenced by his design research, based on Linsay Lord's Naval Architecture of Planing Hulls (1946).
It is also slightly possible that Simmons had noted Twin fins on some prone boards in this period. A short lived, but well documented, experiment by California's Dale Velsey was the Butterfly fin.
Essentially two fins joined at the base it was futuristic in template and concept.
The high aspect fin template used by Velsey would not become common use until 1970.
Apparently the production difficulties were not offset by improved performance.
In 1978 the design was revived as a molded model for use in a standard fin box.
The design was also (slightly) reflected in the Horan/Lexan Star Fin, 1980.

Fin experimentation on surfboards1950 to 1966 was extensive.
A variety of designs, some extreme, proliferated, however singularity and a standard 0'' to 6''placement remained a design constant.

1960
With the introduction of foam blanks, bellyboard riders had their plywood designs were reproduced in the new medium.
Generally the fins retained the long base keel profile and, consistant with surfboard fins of the era, foiling was minimal.
Placement was close to the tail with the fins vertical to the bottom and parrallel to the stringer. 1962 - 1964
In the US, George Greenough built his first Velo Spoon in balsawood in 1962.

Photograph :George Greenough.      Crockett : Switch-foot, page 175.
He reported that the board was originally ...
"a twin fin, but as time went on, I moved the fins closer together, and it
kept working better and better. Eventually, it turned into a single fin!"
- George Greenough,
The Australian Surfer's Journal
Volume 2 No 2 Autumn 1999 pages 84, 86 and 87.
1963
"When Curren visited me at Surfboards Hawaii in Haleiwa during 1963,
he had a 9'4" full gun, an 8'4" semi-gun 3" thick, and a 4'6" twin-fin kneeboard.
All these boards were ahead of their time."
- Dick Brewer
Surfer Magazine Vol 30 No. 10  1989, page 105.
circa 1967
Bear Mirandon of Surfboards La Jolla used Simmons' Twin fin design and matched them with a slpit tail design.
There was a precedent of this design in some early prone boards, see Blackburn.

Surfboard La Jolla Twin-Pin, 1967
Length 8'9" - Nose 17"  Width 22"  Tail 17"
Shaped by La Jolla reef maven Bear Mirandon, the double-pin
tailed twin-fin was an update of a Bob Simmons concept.
This board led directly to the Fish kneeboard design
of Steve Lis, which is still very much in use today.
Photograph by Bjorn de Boer
Image and caption
Longboard Magazine,Volume 2 Number 2, August - September 1994 page 69
1967 - 1968
In the USA, the dual fins had a strong following amoungst  kneeboarders, notably Steve Lis and Rex Huffman.
Lis was credited with the development of The Fish, a design with long base twin fins and a split 'Fish' tail, circa 1967.
From the La Jolla area, Steve Lis was influenced of the design by  Bear Mirandon at Surfboards La Jolla 1970
Following the return of American surfers (some earlier than others) from the 1970 World Contest  in Victoria, Australia, several designers began development of what became the Twin Fin I.

The issue also included an article by multiple US champion, Corky Carroll
Corky Carroll: "Twin Fins"
Surfer Magazine Volume 11, Number 5 November 1970 Page 59.
The article includes a photogragraph by Brad Barrett of Carroll and a Twin fin very similar to the board ridden by Corky  in John Severson's Pacific Vibrations, 1972.

The following article by Cory Carroll was posted online at his web site...
http://www.corkycarroll.com/ as part of a series on surfboard evolution.
There is a wealth of detail in this brief account , of particular note ...
1. The awareness of Australian surfers, Ted Spencer and Wayne Lynch, stars of Paul Witzig's Evolution, 1970.
2. First design credited to Mike Eaton for Rolf Aurness at Bing Surfboards, mid - 1970.
3. The toeing-in of the fins appeared in the earliest models.
4. The rapid development and commercialisation of the design.
5. The equally rapid demise of the design.
6. The influence on further fin design, notably the Tri-fin, (#211).

We left off last week in the spring of 1970, and the aftermath of the World Championships in Australia. There were sort of two different directions in surfboard design going on at the same time.

One was speed shapes. (#56) These were like smaller versions of big wave boards. The problems with these were that it took bigger or at least really fast and lined up waves to make them work very well. A bunch of guys sitting around on little teardrop like boards in typical small California surf was sort of silly. But there were many doing that. The other was very short and wide boards (#45) like the ones Ted Spenser (Spencer) and Wayne Lynch were working on in Australia. These were just the opposite, interesting in small surf but hopeless in anything with size and power.

I was sort of stuck in the middle but was leaning toward the shorter and wider direction. I made one board with three fin boxes. But it was what we called a swallowtail, two points with a cut away in the center. The rail fins went on the outside tails and the center fin was forward in the center. Opposite of what we now use as a ' Thruster.' Also the fins I used where all pretty big. It didn't turn well. Actually it really didn't turn at all, It just went straight. Seemed like a good idea though.

Then one day Rolf Aurness showed up with a short and wide little board with two fins that an extremely good surfboard designer named Mike Eaton had made him (see above).  It had a wide squaretail and the fins where on the outside rails. I tried it and could see immediately that this design could work. The problem was, in my opinion, that it was almost square and the fins were aimed toward the center, in a bit too much. Within an hour of riding that board I was in the shaping room with Terry Martin, one of Hobie's top shapers at the time, making my own version of this new design. It had a bit more shape to it and I only aimed the fins in a tiny bit.

A day later I rode it and was completely amazed at the capabilities of the 'twin fin.' These things could do incredible turns and still maintain speed. This was the first board that I was able to carve a 360 degree turn on. Two days later I had an ad together for SURFER magazine and had a twin fin model on the market, the 'Spacestick.' Did I mention that we were still a bit in the cosmic era? Everything was 'spacey' and 'far out.' Well, these boards were pretty spacey and far out so I had no choice but to call them 'Spacesticks.' Looking back I guess I could be embarrassed about this, but I'm not.

In Hawaii the next winter we found out that the twin fins were not all that great in big surf. Then we started working on designs using three fins (#211); one big fin in the middle and two little fins on the rails.

1971
By early 1971, the Twin fin design was offered by most Australian and Californian manufacturers.

Surfer magazine Volume 12 Number 2 May 1971 featured Twin fin advertisements by Gordon and Smith Surfboards and Hobie Surfboards.
In a indication of future developments, as well as single and twin fin models fitted with finboxes, Surfboards Australia offered a wide tailed board with a centre and two side finboxes.
The design was probably intended to give the rider a choice of fin setup rather than a trifin arrangement.

International Surfing March 1971 included an advertisement for Honeycomb Surfboards titled Are you ready for theTwin Fin?, It's ready for you in Honeycomb.


1972
In the US, the design would continued to be used by a small core of adherents, primarily focused on  the La Jolla area.
Very short designs were ridden by David Nuuihwa, infamously at the 1972 US Championships at Huntington Beach.
1974
The design was adopted by standup surfers, a longer version with with a more standard fin template, was designated The Rocket Fish, circa 1974, the name at least credited to Clyde Beatty.
There is much dispute amoungst US commentators as to the originators of the design.

The wide fish tail was later supplanted by the more popular Swallow tail.

The use of twin fins on prone boards, common in the 1960's, continued into the 1970's, for example the mass produced Bellybogger, circa 1974.


1976
In an attempt to widen his competitive range, Reno Abellira built and rode rode a 5 ft 3" x 20"  model in the 1976 Coke contest, Sydney. Familiar with Australian versions of the Twin Fin I and inspired by Reno, Mark Richards  built his own version .
1977
MR subsequently refined it at a month long shaping seminar with Dick Brewer in Hawaii 1976-1977.
See Mark Richards : Personal Twin fin History, 1978. The design was tested in Hawaii the following winter and contest success in the Bells 1978 and  Stubbies 1979 contests and the 1979 World tiltle proved its high performance capabilities, particularly in small waves. Available from all Australian manufacturers, it was the dominant small wave board design 1978 – 1981. During 1977 George Greenough, Michael Cundith and Chris Brock develope the Tri-plane Hull at Sky Surfboards, Byron Bay.
An extension of the Hull design, first used in Greenough's Spoon circa 1965, it incorporates dual concaves.
While Greenough's
kneeboard designs mostly retain his favoured single fin, Cundith and Brock use Twin fins for their stand-up versions.
As well as experimenting with bottom design, Cundith and Brock also modified the fins with the use of slots to increase their flex characteristics. The design also had a strong following on the south shore of Ohau, notably Larry Bertlemann and 'Buttons', and
was to be extensively used in the USA.
Mark Richards models were made under licence by Gordon and Smith Surfboards.
House shapers were Hank Warner, Robin Prodanovich, Terry S. Goldsmith and E. Duck.
These  were available with Star System fin boxes, a uncommon feature in Australian boards.
Advertisement : Surfing  Magazine June 1981.Volume 17 Number 6, page 93.
In Australia, the design was shaped by  Mark Platter, Ken Freeland and Tony Cerff at Maddog Surfboards.
Mark Richards Surfboards (single fin designs) were first manufactured by Morning Star Surfboards, Mona Vale.
The fin to flyer channels rarely appear on later/copied examples.
The ribbon decals were early designs, gradually replaced by a MR/Lightning Bolt, a MR script and a MR/Lizard graphic.
Apparently the famous MR/Superman logo only appeared on Mark Richards' personal boards during this early period. 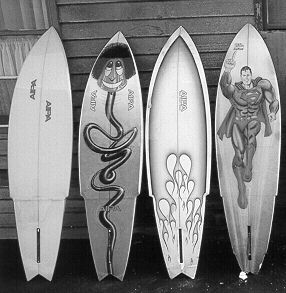