Design history.
"Bob Tinkler started work on perfecting flex in stand up surfboards in 1967 after living and surfing with George Greenough and Bob McTavish in Queens land Australia, And the first custom Tinkler Tail was built in a conventional surfboard design, was the concept of a customizable Tinklertail.
Invented by Bob Tinkler In San Diego 1969 1970 that consisted of a hollow molded surfboard with a bottom tail section embedded in the form, which acted as a resilient adjustable deflection panel.
That assumes variable curves that respond to each individual surfer, based on the water pressure on the tail end of the board.
...
With USA pat. 5425321. Sail, And Surfboards PPA. International, Pat. Pending.
Bob Tinkler: Shaper, Designer, inventor, in sail and surfboards design
All copyrights reserved.
Contact: www. SurfSyndicate.com or emails to SurfSyndicate@msn.com"
http://www.swaylocks.com/resources/detail_page.cgi?ID=1455
Tracks #52 January 1975
Cover story: Waimea - winter in Hawaii
Interview: Rabbit Batholomew
P.T. in large Hawaiian surf
Contests: Duke.
Design: Concave bottoms
Goodvibes (versus The Phantom) 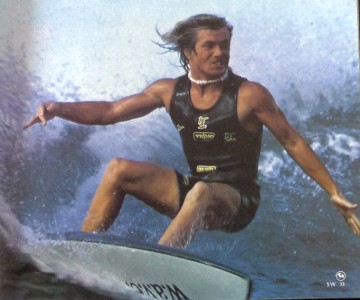 He broke the tail off it at the Bower at about 12 foot so I bought it off him when he was up here watching the Australian titles.
After that, I sort of like flyers.

Breakway: How many boards do you have.
Tom: Three. But I generally use one at a time.
Breakway: You said all your boards were riding flyers. Are all your boards flyers.
Tom: Yeah. Just different lengths, widths, thicknesses. You've got to stick with flyers to make them work. You just can't jump on them I don't think and just ride them.
You can get so much edge on them that you didn't know you could get before. I don't think you could find the total abilities of a flyer.
You can put as many flyers on as you want to. Its been proven. You could put ten on the back of a board  if you had the room and it would still work.
Like the one Mick had.
Breakway: Any comment (on the recent Newcastle contest).
Tom:


1975
Stinger
Original design by Ben Apia (Hawaii) featuring flyers 2/3rds back from the nose (see 422) combined with a stepped bottom (see Hydroplane).
Popular design in 1976 as surfed by Mark Richards and Larry Bertelman (Hawaii).
Widely copied, but most models did not incorporate the initial design’s stepped bottom.

" Blacks Reef is the local, kamikazi spot with the reef only slightly below the surface. Pulling in the swell, this shallowness provides insane vertical takeoff and a nice wall to boot. Bonus excitement for the small group of spectators siting on the knobbly little headland.
Kanga Cairns senses that the waves suit his full-on, no-holds-barred approach and insists that if he doesn't wear a legrope, no-one else should either.
Terry Fitz and Kanga, being the only two naturauls in the final, are getting the lion's share of the inside waves. Terry Richo and Colin Smith are both eating it horribly, trying to negotiate the shallow ledge. Wayne Lynch finds the tube a few times with incredible timing. Rory Rusell knows what the judges are after , so he goes for the tube switchfoot, time after time, and makes it.
Then minutes from the the finishing hooter, Fitz looks in a winning position, that is 'til he decides to bodysurf after a fall rather than grab his board. This decision probably cost him the final. On the wave behind, Cairns drops in vertically, disappears into the tube for seconds and reappears, soul arching to victory. "

The officials' decision not to allow legropes in the final was not appreciated by some competitors, and following this contest, legropes became standard contest equipment.
This was the last Australian professional contest to ban legropes. 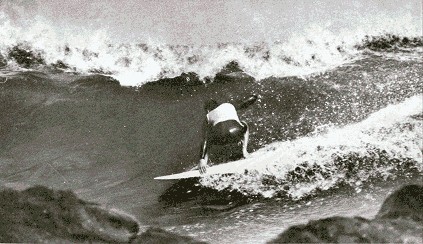