pods for primates : a catalogue of surfboards in australia since 1900
the boogie board
1977
DUKE KAHANAMOKU 1976 Surfing Contest Larry Bertlemann
http://www.youtube.com/watch?v=s0J8oBd9N_c
Part of the 1976 Duke Kahanamoku Invitational Surfing Championships starring Larry Bertlemann.
Results:
1976 Duke Kahanamoku Invitational, Sunset Beach  (11th December)
1st James Jones (H)
2nd Michael Ho (H)
3rd Larry Berltemann  (H)
5th Peter Townend
6th Ian Cains
7th Michael Peterson
8th Jonathon Paarman (SA)
1976
Herbie Fletcher initiates the rebirth of noseriding on a 8ft board with a squared nose derived from Gordon and Smith's The Stretch (1966) with a narrow swallow-tail introduced by Ben Apia in 1974.
A photo of him nose riding the board at Maalaea, Maui, appeared on a cover of Surfer in 1976.
Also Tom Morey article: What ever happened to Nose riding? (Surfer, 1980??)
1977
Twin Fin II adaptation of 1976 Fish design by Mark Richards and Dick Brewer (Hawaii).
6 ft x 20" flyer swallow tail with vee bottom and twin Brewer wide base fins.
Particularly suited for small waves it dominated 50% of the market by 1980..
1977
Modern Malibu resurgence of plus 9 ft traditional Malibu template but with modern construction (light weight, note leg rope use) and design features (particularly rails) by Bob McTavish, Bob Cooper and others.
Becomes an industry standard for small wave use, greying of the market and 1960’s nostalgia.
Tracks
April 1977 Number 79
Interview with Peter Drouyn outlining his man-on-man contest format.
"The Alex McKenzie"
By 1972 Inshore Rescue Boats had made their appearance on the life saving scene, it was decided to set up a study group to consider the advisability of acquiring such a craft.
When the report was tabled it was resolved not to buy one.
Two more studies were undertaken before it was resolved in 1977 to invest in such a motorised craft.
Funnily enough, the person to move the first motion negating the proposed acquisition was the member who moved to buy the craft five years later.

Application was correctly made to have half of the cost borne by a Federal Government Assistance Scheme, but unfortunately the application got fouled up in the Illawarra Branch, leading to much conflict between the club and Branch.
The problem was finally resolved by State Centre of the Surf Life Saving Association meeting half the cost from options not taken up from the original allocation of funds.

Named after Alex McKenzie, then mine host of the Imperial Hotel, Clifton and a great club supporter, it was launched on the 4th December, 1977 by Mrs. Fitzgerald, wife of popular member Alan Fitzgerald, who was President of the Seagulls section of the club for some years.
For a number of years the running costs of the craft were sponsored by Liverpool Chrysler (through Mr. Max Doyle of that Company).
Unquestionably the craft has proved its work as a rescue unit, as a surveillance unit, !IS a work boat and still continues to give service in these fields."

Thorn: Stanwell Park SLSC  (1983) page 58.
1977
Mini Mal smaller (7 to 8 ft) version of Modern Mal above by Bob McTavish approximating first short board designs of 1967-8.
By the end of the 1980’s has become an industry standard with the application of Thruster fins. Breakway, December 1977
- Feature Article with 16 year old Tom Carroll 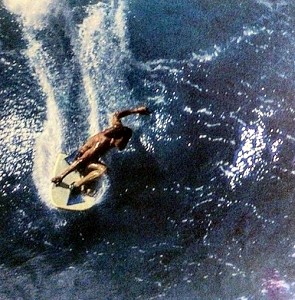 REFERENCES FOR THIS SECTION
BOOKS