The First Surf Board Rider in Australia
Duke Kahanamoku was not the first Boardrider in Australia.
There are several references that detail the use of surfboards before 1914 and close study of photographic evidence indicates that there was a healthy interest in boardriding in Australia pre -1914, which blossomed with the impact of Duke Kahanamoku's demonstrations.
The image below has seven (8) various surf craft, including Duke Kahanamoku's board' and not the reported Manly surf boat.
Photo 1.
Duke Kahanamoku leaves the water, Freshwater Beach 10 January 1915.
(Date is questionable) 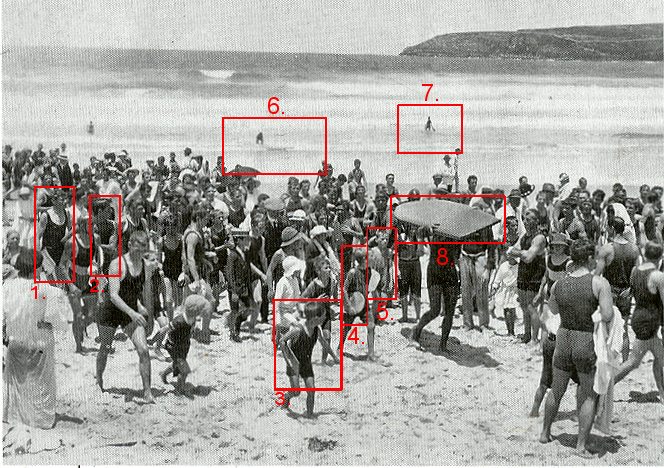 Blown Up Images from the above photograph....
Man holding board, approx. 6 ft, Board #7

The first full size board was probably an Hawaiian Alaia imported by C.D. Paterson of Manly, which was not successfully ridden (it was retired to the family home at the Spit to be used as a ironing board).
This board inspired several replica boards.
Made from Californian redwood by Les Hinds, a local builder from North Steyne, they were 8 ft long, 20" wide, 11/2" thick and weighed 35 pounds.
Riding the boards was limited to launching onto broken waves from a standing position and riding white water straight in, either prone or kneeling.
Standing rides on the board for up to 50 yards/metres were considered outstanding.
(Harris page 53-54).

Other full surfboards are said to be in use in Cronulla (see Duke visits Cronulla, 1915) and Coolangatta, Queensland. (Harvey page 8).
The use of small hand boards was common.

There is some question whether the timber - Sugar pine (Pinus lambertiana) - was imported or native to Australia (the former) and the difficulty of  shaping the unfamiliar wood.
In the first case suitable native Hawaiian timbers had been rare since 1900 and most Hawaiian boards used imported timbers, mainly Californian Redwood.
Secondly, whatever the difficulties, the exercise was apparently repeated  several months later  in 1915 when Duke Kahanamoku demonstrated  swimming / surfriding  at Lyall Bay, Wellington New Zealand ( Warwick 1978). Presumably on another 'makeshift' board.

The Date
The most significant day in the history of Australian surfing was Duke Kahanamoku's exhibition of surfriding to Australian surfers at Freshwater Beach in the Southern summer of 1914-1915.
Although the event is mentioned in many sources there is some confusion over the actual date.

Unfortunately all of the above are incorrect.

Note that the exhibition was promoted in advance and it is possible that the board was test ridden before the advertised day.

KAHANAMOKU.
-«
Hawaiian Swimmer.
ARRIVES IN SYDNEY.
"Since the day my brothor, Duke Kabana- moku, arrived home I have been looking for- ward to ' a visit to Sydney," remarked Sam Kabanamoku, of tile Hul Nalu Club, Hawaii, on his arrival yestorday morning by the
Sonoma. '
Ho resembles his brother In features. Liko most Hawalians, Kabanamoku Is modest, and be has a broad, gonlal smile, which will mako him popular in Australia.
Twenty years of age, ho bas had a meteoric swimming career, and he is the moBt versatile overseas champion that has vlsltod Sydney. He holds tbo 100 yardB, 220 yards, 440 yards freestyle, 100 yards breantstroke, and 60 yards backstroko titles of Hawaii. In addition to prossiug closely his brother and J. Weiss mullor In the 100 metres world's championship at the recent Olympic Games, at Parts, ho was also one of the six selected to compoto In the American team lu tho 800 metres teams ohamplonship, in which they beat Australia. His crowning performance was 100 metres lu GOs, at Honolulu, in April this year. That time has only been bettered by Welssmullor.
Those who travollod on the boat with Kah anamoku stated that he has a fine volco, and
is a clever musician.
Kabanamoku was met on the wharf by Mr. O. G. II. Merrett, manugor of the Australian Olympic toam, and chairman of tho New South Wales Amateur Swimming Association« MT. L. Duff, lion, secretary; and Mr. H. R. Kelly, hon. secretary of the Amateur Swim- ming Union of Australia.
In the afternoon ho visited the Domain Baths, and had his first swim, declaring that
the water was cold.
Last night he said that Sydney was "groat," and ho was not sorry that he had postponed for a year his visit to Stanford University, where he will study medicine.
MISS WEHSELAU.
The Lord Mayor-elect (Alderman Stokes) has decldod to extend a civic welcome to the famous Hawaiian swimmer, Miss Wehselau, on January 14. Miss Wehselau performed with distinction at the Olympic Games.

SURF LIFE-SAVING.
KAHANAMOKU AT MANLY.
I San» Kobanainokii, the Hawaiian champion swimmer, was .the guest yesterday of the North Steyne Surf Life Saving Club, and a large number of meinlicrj of Hie club' and ' their friends were present lo welcome bim. Kahnnumoku ima'received by Mr. D. Love (pic-fdeiit) on behalf of the club". The Mayor of Manly (Alder- man Samuels) extended a welcome lo the municipality, and Mr. 0. G. II. Merrett spoke on behalf of the Manly
District Sporting Union.
During the morning n first-class surf race took place, there being about !» competitor«. Kakuliamoku won easily,. swimming leisurely the whole distance. A. Morton (Manly) was second. There was also a surf boat race,, in which North Steyne, Freshwater (two crews), Manly, and Curl Curl competed, the event being won by Freshwater A team. Tho boats also gave a dis- play of surf-shooting, and Knliununioku gave an exhibí
Hon willi « surf board,

News has been received by cable that Miss Isabel Ramsay Letham, of Manly, has received the appointment of director of swimming to the city of San Francisco.
Miss Letham will be well remembered .by surfers as the first to exploit the "big" surf board at Manly and Deewhy.
Last season she acted as assistant director of swimming at the Californian University.
Miss Letham is a daughter of Mrs. Jean Letham, of Chatswood.