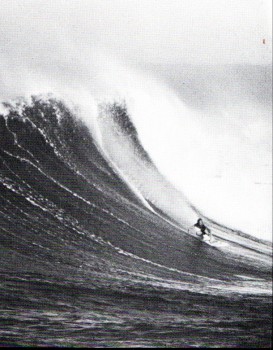 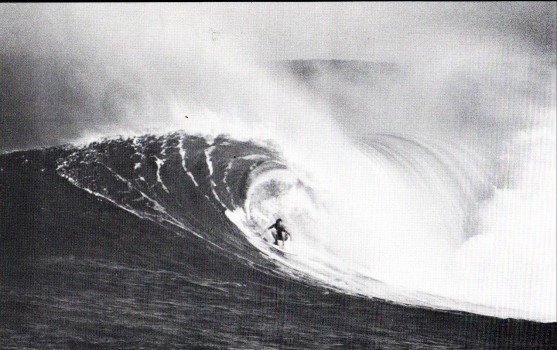 THE SKI, a symmetric waterfoil of perpetual motion. Australian inspired for clean water flow blending natural continuous curves. Turbulence, resistance, release, lift, friction drag, pressure drag, all the principles of hydrodynamics have been applied. A clean form with the width and thickness forward, rounded tail, extra planing surface, oval rail. S deck, with no straight lines, spots, or sections anywhere in the board. The Ski is a combination of curves working together to produce the total effect. An outline, bottom line, rail line, and deck line blending and complimenting each other.

A CLEAR OUTLINE with width and thickness slightly forward of half from which all lines are drawn in continuous flowing curves in all directions. With the widest part also being the thickest, and by placing this area forward of half, the balance is correct, stability is gained, and there is less drag. The outline tapers from this area aft to a low area tail section with a rounded tail. A rounded tail, slightly pointed where the two template curves, right and left. meet. A tail that will never catch, that can be rolled from side to side effortlessly. The Ski outline is a blend of natural curves, soft and clean.

THE BOTTOM LINE relates closely to the rail, the two work together. The bottom is gradually curved lengthwise, dropping smoothly in the nose to meet the lift in the deck. Eighteen inches back from the nose there is a slight lengthwise curve to the tail, but this area, the center 12" is flat across except for the natural curvature in the meeting of the bottom and rail line, making 3/4 of the board a running surface. A relatively flat surface on the water, more planing area, and increased speed. A rail to rail curvature in the 18" nose section gives the nose a high rail line. The lifted nose breaks up small parts of chop so that by the time it hits the planing surface, the chop is broken down, minimized, and the running surface can do its job accelerating.

THE DECK LINE of The Ski has more noticeable curve than any other part of the board with its "S" deck. The deck, using soft gradual curves, tapers in the shape of an "S" to meet the bottom line to the tail. It is high in the nose, dropping to a low section, rising in the widest and thickest part of the board, and from there slowly and evenly tapering down again all the way to the tail. The deck, rail to rail is crowned with the roll in the deck tapering to an even rail. Combining the "S" and the crown, the thickness for flotation can be obtained without hurting the maneuverability of the board and you retain a responsive rail. Again, the deck is a blend of natural curves.

THE SKI, like all Weber boards, is a form to communicate. A form that will follow with never a hint of catching a rail, a form that will drive through the lip and down into it again, hold the turn still later, pull it on and aim for that pocket.


When I actually thought about it, I didn't even know where his home beach was, all I knew about my hero was that he came from the Dee Why - Freshwater area and that he was the best surfer in the world.
How many times had I watched him as he slid through Collaroy in his previous car, a beige single-spinner Ford, usually on his own but sometimes with his girlfriend Tanya Binning by his side.
A few years later, we all saw some sexy beach shots of Tanya in a European film called Mondo Carne.
She was a pretty competent surfer but it was her long blonde hair, height and striking smile that were most memorable.
Henry and I once stumbled on them making out in the back seat of Midget's car at Ma Browns, a secluded beach near Long Reef.
We couldn't see much but it was enough, Midget had the style of a champion.