pods for primates: a catalogue of surfboards in australia since 1900
Two, Two, Two Boards in One, 1981. 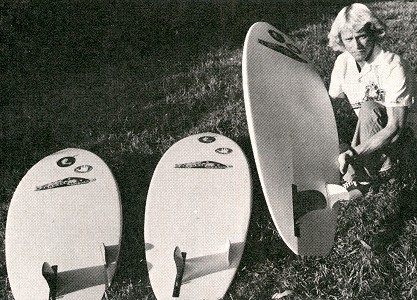 1.
The original inspiration for this unique design came to me from Australian surfing revolutionary Peter Drouyn, who had an early 5'8" version at the 1980 Coke contest. ( See Fin Index Entry). What I liked about his board was the quickness of the wide tail, combined with the positive projection of a pintail off a frontside turn. What you had was actually two boards in one.

When I returned to California last summer and gave it more thought, the idea seemed practical for my style of surfing, which is based on bottom turning and posi-tion in relation to the curl. I also like to ride tubes, having surfed Kirra nearly all my life.

From my observations and from discussions with Shaun Tomson on twin fins, I have come to the conclusion that they are not good tube riders. Tube riding relies on the forward position of your board to hold an edge, and tubing waves are sucking up the face so fast that they draw the twin-fin's inside
edge up, releasing that forward edge which is crucial in a critical tube situation.

With this in mind, it seemed practical to have a board with a pintail for projection on the forehand turn and riding the tube, and yet have the wide tail area, acceleration and looseness of a twin fin for coming off the top and cutting back.

Now what about backside? Well,' the vee and pintail are offset to the extreme forehand side (if you were riding a symmetrical pintail of my forehand planshape it would only, have a 12" tail) and the single fin being placed in my standard posi- tion (6" from the tail) neutralizes the small fin's effect. (On a frontside turn the small twin fin is little enough so that it will release. On most forehand turns the small fin is free of the water.) The twin fin actually aids the vertical projection of the single fin up the face in a backside turn.

At first I was skeptical of the probable backside performance, as much of my surfing these days is done in Huntington Beach beach - breaks which require many backside boogie sessions. Of the three boards of this design that I have built so far, though, they go unreal both ways. Actually, they
have provided increased acceleration off my backside turn.

I'm not claiming this design will revolutionize your surfing, because it won't. It's a pretty personalized
design that works umeal for me. If you're into short arc turning these boards won't work for you because they are built to project and flow, utilizing the extra speed generated to get radical and yet maintain positive control.

I should also note, that if you are a goofy foot that the design woul. have to be flipped over so that the single fin would be on your forehand side.

So if you're into power, flow, speed and tuberiding, then try one. They're a lot of fun and something that has kept my surfing fresh and inspired.