Asymmetric means not symmetrical; in the case of surtboards, it means one rail is shaped differently from the other.

Firstly, you only use one rail at a time, so why not?
Secondly, forehand you apply pressure through knees, ankles and toes -through a series of muscles and sinews.
Backhand the pressure goes much more directly -bones more in line, pushing into heels that can carry massive pressure.
Hence the forehand turn is the more controlled, less powerful and the backhand vise versa.
So shape each rail to utilise these qualities.

Thirdly, surfing forehand you generally require a longer reaching forehand turn and tighter quicker cut back to put it back in the power.
You don't need the same arcing potential from each rail if you consistently surf a particular spot, breaking one way.
It means that, if it's practical, you can fine tune your equipment for a particular break, giving your forehand a more suitable turn and tube hugging characteristics, and your other rail a better cut back.
Make sense?

So for many years now there's been a small flicker of asymmetric thinking.
One small shop, Nelson-Ekstrom in La Jolla California made them for years.
Midget made a hook-back that lengthened one rail back in '63 and sold dozens.
Bob Razby shaped plenty in Byron in the early seventies, and is now an excellent New Zealand shaper, no doubt still thinking asymmetric.
I made my first in Hawaii in 1970.
Bob Newlands, the Surf-Aids man has been riding Razby's, his own, and mine now for seven years.
And around Lennox, Byron there's a small but growing school of ace-freaks.

In what way are our boards asymmetric?
Well the general theme that pops up is a narrower longer forehand line - 'gunnier' if you like - that delivers excellent forehand draw and helps to find the tube -  a pocket rocket.
This forehand tail outline is just the one you personally prefer, be it pin, wing pin, swallow, square, diamond or round.

The general theme of the backhand is wider and pivotier; one that cuts back better.
Over the years it was obvious that we knew little about what makes a cutback tick, but recently by adding and subtracting foam and glass from existing shapes that we were currently surfing, we learnt a lot.
If you notice the clear board with the complicated tail you get a before and after view.
"Before" shows the backhand as a short pin, sting coupled with a longer wing pin forehand.
Although this combination found the tube well, its cutback was quick but gutless.
Lost all speed and slushed out in a cutback.

The "After" shot shows the added foam and" glass to give it a swallow backhand with increased area.
Now she slashes cutbacks and maintains speed beautifully.

We continued this idea, area under the heels for cut- backs and the reaction has been nothing but positive.

Adding this all up, the present recommended asymmetric shape is your favourite fast forehand combined with an area sting backhand.
Combine this with an offset fin, (and perhaps vee to fit) one point off to the cut back side of the stringer about 1 1/4" at the tip, and located closer to your forehand rail.
This is vital, makes or breaks it.
It emphasises GUN on the forehand, AREA under the cutback.

In practical terms, your forehand down-the-line turns are longer, stronger, and having the fin closer to the rail means much control in the tube, with positively no spinouts.
You can simply ride deeper, and make it.
And your cutback is highly efficient, putting you back into the juice without power loss, meaning more natural feeling 'S' turns and greater total efficiency.

The only hang-up is they only go one way.
Not so hot for the beach break man, or the traveller, but hot if you live on a one way spot, or often surf a favourite break.

A spin-off from our experiments is the understanding of twin fin toe-in and bonzer toe-in.
The line the fin points down could be called your axis.
Our allways movable fin, when only three quarters tight, found its own axis after surfing rights.
And that axis was the one described earlier, 11/4" off to the cutback side to the nose.

A twin fin is simply a dual-axis board, one for each turn, with some planing foam between.
It's like two tiny guns grown together like Siamese twins.

And the Bonzer is a tri axis.
A central dominant axis with others that take over when banked, lengthening the turn in comparison to a single fin.

The asymmetric is a single axis, offset to suit a one way wave, with the added fine tuning to compliment the turn required.
We've learnt a lot, but don't pretend to boast that we know it all.
For example, things get complicated when you try to build a right hand point board for goofy-foot.
There's a lot to learn and it's fun all the way.

Images from the Bob McTavish Collection 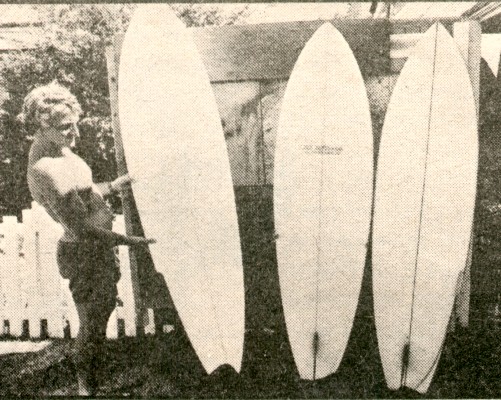 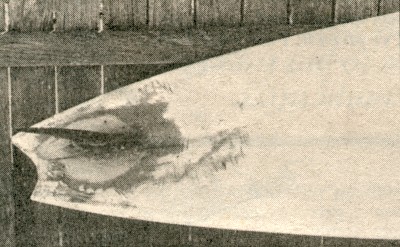 NOTES
1. All hand shaped surfboards are unintentionally asymmetrical
2. Images 1 to 5 scanned from poorly printed photographs.
One image not reproduced due to poor quality..
3. Image 6 was printed full page (page 39) - hence superior scan quality.
4. A example of design experimentation combining several established designs, this variation in template has had little (How much is little? - None?) application since the introduction of the Thruster, 1981.
5. The asymmetric template had a strong following in sailboard design circa 1983 - 1988. 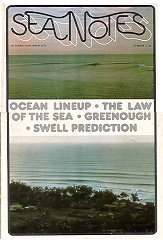 Not this issue's cover