Introduction
Design article detailing Fitzgerald's development of the Drifta Mark III up to February 1981, with small rail fins and a large centre fin in a fin-box.
Note that the Drifta Mk III rail fins are flat on the outside and foiled on the inside, reversing the common design.

Terry was a smart guy (he went to university) and he did his homework; technically, this should be the correct foil template for rail fins.

This was the second entry in a three page design feature titled Australian Unorthodox : The Religion of Oz Design.
Other contributors are Dougall Walker, Geoff McCoy, Michael Rae, Phil Byrne, and Col Smith (Newcastle).
See below. 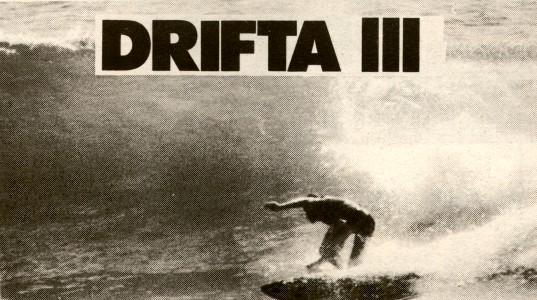 A basic cut-back is a stalling manoeuvre for a single fin and a sliding manoeuvre for a twin fin.
On both boards you wait for the wave - a slowing manoeuvre.
With a Drifta the cut-back becomes an accelerating turn!
The central wide base fin drives the board In a pivot arc determined by the rail fin which in turn provides stability and short arc direction.
DEVELOPMENT:
The first trl-flns popped up in the early seventies as a result of trying to ride 6'0" boards at 10' Hanaiei Bay.
Feb '80 I started work on blending twin-fin reactions with single fin power, leading to the Driftas.
Oct '80 - on a Mark II 7'4" (broke it at Sunset that winter) the power drift started to show with edged flutes In the barrels.
Jan '81 and Mark III hit the streets, nothing like a wave feeding frenzy, the rest Is history
- Gary Green 1st NSW Juniors, Nick Carroll 2nd Seniors, Steve Wilson 9th Stubbies.


Putting together any new surfboard trip, people naturally are very critical especially if you are sacrificing personal performance in the short term for long term overall development.
Going backwards in your personal surfing to eventually go forward in both boards and surfing, and understanding the value of going to extremes to find a medium value is difficult.
I know.
The results to date with Drlfta development have more than justified the bullshit that has floated around.
Thanks Steve, Nick, Barry, Linda, Greenie and the customers.
There's more to come.
Yowzer!

Concaves — Do they track?
Do they increase trim speed?
Are they more responsive through turns?
Do they offer more hold on takeoffs?
Can they be made to function like a flat bottom?

These are questions I have been asked over the past eight years, while I have been designing concaves for surfboards.
The key to all the above questions is subtlety in bottom contours.
Channel bottoms being another possible functional bottom shape are so chaotic when it comes to production that they are not really feasible.
I am speaking from past experience.

The ease of production compared to channels is great; the shaper naturally has to spend more time on it, up to about half an hour, depending on his skill.
The sander also has to be extra careful.

I am presently using three flyers in the tail on hotdoggers as this allows wider tails and more curve or hip for extra manoeuvrability as well as incorporating the no-nose concept.
Extra vee in tail for quicker rail to rail transition.

Over the years finboxes' pros and cons have been discussed in full.
This article is designed to refresh surfers' memories.

Nowhere in the past history of surfing have finboxes been needed more.
Quite a statement you might say, well let's take a new look at the fin box.
With the arrival of "New Wave" surfing, a combination of short boards and a growth in general awareness of surfing's capabilities, the fin box is a must for fine tuning.
Your new stick now becomes multiple in function in large or small surf.

Let's face it, not everybody can afford a fleet of surfboards, not even the manufacturers themselves (due to costs of materials).
The extra price of a fin box is more than offset by the extra hours of pleasure and adventure in investigating the possibilities inherent in the fin box.
Twins are slightly tail heavy with boxes but performance is not impaired.