The origin of these boards is speculative, but broken sections from discarded canoes, outrigger floats or paddles (the blades) are  possible sources.
Dimensions ranged from 3 feet x 12 inches (the smallest example in the Bishop Museum, Honolulu.
Catalogue Number :C.5966) to 6 feet x 9 inch boards in Aotearoa (New Zealand).


With the development of an adult surfing culture, prone boards  became essential in acquiring basic surf skills. In the 20th century,  the Paipo has been re-invented several times... The most successful (in sales, performance and safety) is Tom Morey's Booggie Board, 1971.
Solid timber handboards/bellyboards were in use on Sydney's beaches before the visit of Duke Kahanamoku in 1914 - see History/Duke/Detailed Analysis.
The enthusiasm generated by this visit saw Sydney surfers persue the developement of the standing board and prone craft  were dominated by the Surf-o-plane, circa 1933.

These boards were in Victorian use as early as 1915, by a Mr. Jackson and Mr. Goldie at Point Lonsdale, after a visit to Hawaii.
They were either imported or homemade adaptations and in 1915 they encouraged a local girl, Grace Smith Wootton, to take up the sport.

Plans of solid timber prone boards were pulished in Popular Mechanics magazine July 1934 and Popular Science magazine August 1935.
These illustrated that such boards were already in use in the USA and publication in such magazines probably saw these plans distrubuted world wide.

The design was popular in the southern states of Australia and in New Zealand, South Africa and UK. Although many were probably home made, this and several New Zealand examples were probably factory made - note regular shape, nose lift and paint decor. Lamaroos at Phillip Island, Victoria 1935.
Note that two boards to the left appear to be laminated sections.
from Two Hundred Years, No. 47 page 1124 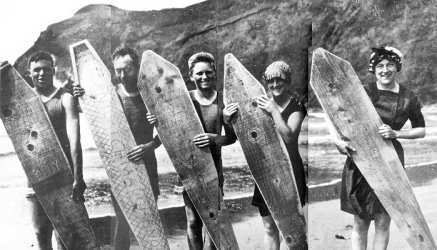 Builders from the Register of Australian and New Zealand Vessels by Mori Flapan
http://www.boatregister.net/TasmanianBuilders.htm

Maritime Museum of Tasmania
http://www.maritimetas.org/  Sporting Island -- A History of Sport and Recreation in Tasmania
http://www.bicentenary.tas.gov.au/events/event.php?id=237
The book, Sporting Island, by David Young highlights important events, activities and people who have influenced and contributed to the development of sport and recreation and helped shape the Tasmanian community in which we live. The book will provide a background to Tasmania's sporting and recreation heritage and enable Tasmanians to understand their sporting and recreational cultural.
David Montgomery Chiropractic Clinic
413a Sydney Road
Balgowlah NSW 2093
02 9949 2315