pods for primates : a catalogue of surfboards in australia since 1900
McTAVISH
ON THE
CLASSIC
DESIGN 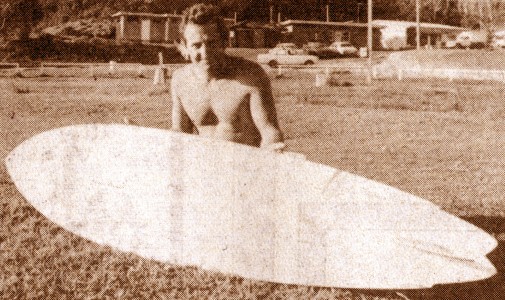 by Bob McTavish
It's definite that things are happening in the shaping world.
After nine years of short boards, at last basic design  truths are being clarified.
Once there was a rule in shaping  that went something like this - "For every change you make  you gain some good feature and you gain some bad" or when  you exaggerate  some aspect you get a good highlight and a corresponding negative highlight and that's that...

In practical terms this meant that we were all going to have to put up with some minuses along with the pluses.
A good board was going to the one that had plus points you could work with and minus points you could best overlook.
A bit of a dud in some conditions, or not so good at doing some manourve (no, sic) longer holds true  for many facets of design.
It still may apply in some aspects, for  example, tail outlines, but in rails, rocker, profile bottom and deck shapes, the story has changed for mainstream design.
After covering the spectrum in these aspects, trying them this way and that way and in between, classic design can now be documented in terms of measurements and definite statements.
Designs, that is all the pluses and no minuses, for the great majority of surfers, under a broad spectrum of surf conditions.

Consider a few features with me.
Try rails, they were soft for decades, the hi-lo, the full low hard, now hard soft.
For the past 5 years it's the proven design, right?
The actual size of the soft rail, at the widest point seems just fine about the size of a 20 cent coin. Nobody can argue that this is not the proven acceptable mainstream rail. 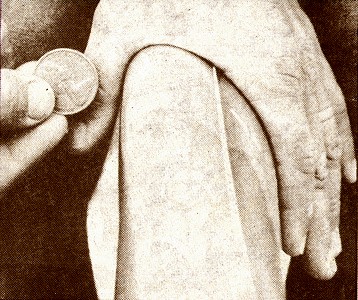 For years it was the flat forward tail lift thing.
Then when boards went short and speed was needed in the tail, rocker was reversed, straight under the tail, with rocker in the nose.
(F, sic) four years ago a little tail lift was found to help with vertical drops and work high in the wave.  People got  a bit muddled up with this and generally fuzzy thinking produced a too soft  tail, the through-out rocker being a groovy way of being undecided.

Now there's a sense in having the straight under your feet.
It delivers speed without effort.
And the tail kick thing still holds true.
So the on-the-ball shaper puts them in very definitely.
You get speed and manourveability in your rocker.
Front footback, back foot looseness. (sic?)

Nose rocker can't just be dropped in.
If you use a basic arc, you end up mushing under when you get forward, so it's accelerating the rocker thing.
The right amount of rocker that delivers speed with safety is 5 inches in the nose, 1 1/2 inches in the tail, for an average length mainstream board, blended in the above manner.

Now the profile.
We launched into full foil in 1970.
But your whole board isn't immersed, so why?
OK foil your rail taper.
The lighter the nose the snapper it is.
You can chuck it around easily.
So now we thin the nose out to remove weight.
Carry the volume through toward the tail to assist paddling, then taper off the last 2 feet into a fine tail.
This taper provides to water flow over the deck-tail which is only very slight - enough to hold the tail in without dragging the tail under.

This profile means you end up with a slight 'S' deck.
One third up from the tail, the deck peaks.
It provides loose, light handling, extra good for tight turns high up in the wave, and for split second adjustments and corrections.
This makes for more accurate surfing.

Also the profile provides good paddling.
This is because the bouyancy is back where it needs (to be, sic) to lift the tail.
Also with the 'S' deck, you get your feet on different deck planes.
With back foot pressure your weight is generally back, and the angle your weight is applied to the deck  is near vertical due to the down angle.
Visa Versa for the front foot, and it's a separate plane.
Sound like a sensible rocker?
Brewer has been doing it for 18 months, Parrish for maybe 12.
It works.
It adds up with the bottom rocker too.

The bottom shape that really works is like this.
Nose vee, into flat, into tail vee.
But there's a little more to it.
The tail vee is only a swelling around the fin, due to the straightish rocker into the fin and the radical little tail kick.
So the rail rocker line is a nice curve due to the vee, get it?
Have a look at one closely and you'll see what I mean.
The vee has gone by the time you get to the very end.
Some people call it the spiral vee.
It's the only way it can all add up.

The nose vee.
You know the nose is almost never buried, so why the vee??
If you're doing say 30 K.P.H. on the wave, and your've got a 20 K.P.H. offshore wind  your've got a kite under your feet.
Look at all wings, they've got a vee of some sought (sort, sic) between them.
Why?
They self-stabilise.
Follow that one?
Try it.
Try a hard wrap around cutback off the lip, combo at the top of an 8 foot wave with a howling offshore.
It's better that a flat nose underneath.

OK, so it sounds heavy to say that all these features are right, the best.
But try them.
The combination is the sum total of all the research that's been sunk into surf design, the radical, the conservative, the Aussie, the Hawaiian, and put together well.

We have the hottest mainstream design  going with an absolute minimun of hang-ups and restrictions.
In fact they feel so hot we've yet to find a bad aspect to them.
No doubt things will change in future years, but now true design is jelling into a most refined and delicate stick that must be put together accurately and with understanding of what these individual elements do, So look for it.
If your not getting it you're probably not getting the best, in mainstream design anyway.