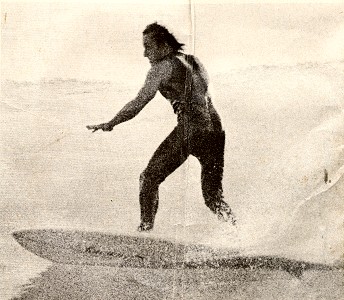 by Bob McTavish
Surfing these days revolves around speed.
Many boards are designed to go extra fast, while still retaining excellent maneuverability.
Narrow boards with low rails do it by having a drawn streamlined plan shape and pure flat planing area all the way to the rails.
They're fast when running flat up on a wall.
Excellent cruisers!


However, wider boards with round rails and wide tails don't necessarily put you out of the picture. Their speed potential is locked in, and you are the key.
They can be banked higher, and if they are finned and foiled correctly, they really take off while sitting up on their edge.
This is due to the centrifugal force gained from the arc pressing you into the board and greatly increasing the board's momentum.

So, if you place your turns well, you can get your slug really flying. A string of full bottom arcs, and your speed increases in every turn. By this time, you're just flying over the water and your board is just a ball of spray as you kiss off each turn.

And it feels so good!
You can really feel surfing, feel the force and speed.
It's like a jet plane - you don't know you're even moving at 500 mph ...unless you go into a bank!

The ways to get more punch from the board are many.
First, your board needs to be in tune.
The wider the tail, the bigger the fin and the softer the rails, the more fin you can use.
And tune the flex in your fin if you're behind this kind of surfing.
A good glass fin of 25 layers with 2-3 inches of spring in the top will deliver maximum drive.
It must be firmly anchored on, glassed on preferably, to deliver all the thrust.

Next, you pick up the rhythm of a thrust turn.
Go into the turn crouching some and expand in the turn, pressing your whole weight into it while fully banked, and you'll take off.
Up on top there's no need to pull the nose back down, as a wide board will run along the face banked on the other rail.
It'll keep carving all the way.
It'll also run way out on the shoulder if you wish, and the wide tail will not sink as you cut back out there for the roundhouse turn back in on the curl.

In the cutback, also, the crouch and extend thing can be used to advantage.
When you expand, try throwing your arms up over your head for a little extra thrust.
It's a whole rhythm that can be worked on if you've got a wide-tailed fin diver.
It's sort of like riding a  skateboard on flat ground.
You push it hard through turns, crouching and expanding, pumping it around.
And like riding a skateboard, you'll find yourself getting power from the wave where it seems impossible, like right out wide on a dead shoulder.

On either kind of board - the narrow streak or the wider, rounder fin driver - backside turn seems to be more powerful.
I guess it's because your heels can handle more weight than your toes.
One thing that's worth a try in backside turns - lead your turn through with your left arm.
I mean put it through the turn ahead of you.
You can throw it back, ease it around, or just point with it, what ever suits you and the situation.
It puts the power through your back foot, which makes the turn much more controllable.
It's a form of rotation, I guess.
Also, it leaves you set up beautifully for a turn back or turn down off the wall, or an explosion off under the lip, because all you have to do is throw your left arm back the other way and follow it.
You'd better reverse all this stuff if you're a goofie.

Each kind of board has its advantages - the streaks streak and sashay and slice inside of big tubes, but they dud out completely in roundhouse maneuvers and distant cutbacks, except maybe when they're super streaking (which I guess ain't that rare).
They're right on for those big Island tubes and walls; that's where they emerged from.

The fin drivers seem to go extra fine in Australia's largely broken conditions- a quick little tube  followed by a gooshie part, followed by another tube, and in the majority of Californian surf.
Fin drivers are extra strong in short surf that allows cutbacks and also in rough, lumpy conditions, so they suit many East Coast surfers right to the core.
But they're so slow in big drops that sometimes you don't make it along the bottom under all that soup, unless you're Nat.

Someday soon someone is going to incorporate the features of each in the one unit.
Maybe the board needs to be flexible to provide the right curves at the right time.
But then that's a wing.
And we'll all be seagulls cruising. .. arcing. ..soaring. ..wheeling. .. drop!
And scream into a big bottom turn that strains every muscle and the whole frame, and carve up into the flow again, pick up the thin stream of power and play on it, all day in the sunshine. Other articles in this issue include:
George Greenough article, photographs of George surfing at night and from The Innermost Limits of Pure Fun.

The New Adam: Merv Lason and his Wave ski, 6 pages