surfresearch.com.au
Bob Cooper :  Magic
Cooper, Bob: Magic
.Surfing World, Volume 14 Number 4
circa August 1970,  pages 14 to 17.
Introduction
This brilliant article was written by Bob Cooper, who had recently opened his surfboard factory in Coffs Harbour, on the mid-north coast of NSW.
The article examines the difficulty of determining surfboard performance; for Cooper, ultimately, a subjective judgement.
Possibly indicating that the editor has directly transcribed it from Cooper's handwritten manuscript, there are several spelling errors and some of the text is grammatically confusing,
These are noted and adjusted.
Baby was a balsa board shaped by Phil Edwards circa 1959?.
Footage of Phil Edwards and Baby in Australia is in Bruce Brown : Surfing Hollow Days, 1961.
See
Bruce Brown: Phil Ewards Profile, US TV, c1965.
http://www.youtube.com/watch?v=9x6VY1nhBt8

Bob Cooper
Originally from Santa Barbra, California, Cooper had an indelible influence on Australian surfing and surfboards.
He was one of the first Americans to have extended visits to Australia, beginning in 1959, and later became a permanent resident.
Cooper's accounts of the surfing potential of Australia encouraged the extended visits in the mid-1960s of fellow Santa Barbra surfer, George Greenough, who likewise became a permanent resident.

Cooper started surfing at  Malibu in 1952, experiencing the sport before it rapid cultural and commercial expansion, often dated from the success of the novel and film, Gidget, circa 1960 -1962.
In California he witnessed the elite of American board riders, in particular Phil Edwards (as noted in the text) and Malibu's Micki Dora.
He initially worked for worked for Velzey Surfboards in the late 1950's, and acquired an extensive knowledge of surfboard design and manufacturing.

On relocating to Santa Barbara in the early 1960s, he was a key employee at Yater Surfboards.
Rennie (Reynolds) Yater was one of the outstanding surfers at Rincon, and considered as one of the premier Californian board builders.
Here he also befriended locals, Richie West and kneeboarder George Greenough.
Cooper's accounts of the surfing potential of Australia encouraged them to visit the country, Greenough also became a permanent resident.
Bob Cooper returned to Australia for an extended stay 1963 - 1966.
Circa 1963 he joined the staff at Hayden Surfboards, at Alexandra Headland, Queensland, where other employees included Bob McTavish, Algie Grud (dings), and Russell Hughes. 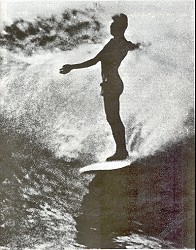 Everybody said that "BABY" was a magic surfboard.
To watch Phil Edwards ride it, it certainly seemed like a magic surfboard.
I rode it, it felt very good to me.
Phil watched me ride it, said I rode it very well.
After that I felt there could be a little bit of magic in there.
Phil's magic, my magic, how much magic is there in a surfboard?
I suppose that depends on the Sorcerer who creates it, sells it, rides it.
The Wizard who convinces you  that the board is the problem not you.
When a guy comes into a boardshop and orders a board he has many months of conditioning.
The ideas have been put into his head by his last surfing experience,(if) it wasn't a good one, very few people blame themselves; it was the boards (sic, board's) fault.
He wants a board like someone that's riding really gas lately, like one of the stars, somebody who has the ability to make a board work on it's tail-block, or carve great arcs.
There are any number of surfing genii around, very few people look at the bloke, they look at the board.
They don't examine the way he walks, or the way he uses his hands, the way he gets into a car, the way he ties on his board, the way he carries on with other people, his mental attitude, his physical posture, the things he reads, his movie idols, the people he associates with, these things are never considered.

After a guy comes out of the water really ripping, you look at his board - like his board with it's latest concave, straight hard edge twangy fin, pin line fine rub out, like this was the magic, this was the thing that had it all.
This obscure fellow just had the luck to acquire the object; this piece of machinery.

Kids come into my boardshop and say "I want a stick exactly like number one hot in the area".
The kid has no resemblance whatsoever in his total character, total physical (sic , possibly physique) to No.1 hot in the area, but it's amazing how the board will improve him.

Guys come in and say, I've got the latest twangy fin, I've put it in my oid board and it makes a world of difference.
You watch the guy on the old board with the new fin.
He doesn't seem to be improved that much.
Yet you can tell there is a spark there, that he is firing on a few more cylinders than he was last time.
Now is it the new fin or the fact that his old board with the new fin has has acquired a new personality.
Not that it's speed or manoeuvrability has been improved markedly, but there is a new feeling that's being generated up through the bottom of his feet, ankles, knees, pelvis, spinal, neck,  'BOING' ... and he thinks it's the fin, or he knows it's the fin or he doesn't care.
He's got a new feeling, I suppose it's cheaper to get your thrills out of changing fins than buying a whole new board.
What I am getting at is; Phil Edwards' board with Phil on it, was the ultimate package at one time.
By the way Phil's board name was "BABY", in conversation he reffered (sic, refered) to it as "BABY", and never qualified it as "Baby" my surfboard.
Me and "Baby" went down to the trestles (sic,The Tresltes, a noted Californian surf break) or I took "BABY" out etc. etc.
I think he's still got the board.
Nat rode it, he can tell you the board had a little magic in it, I think Midget might have also - no matter.

So as a person who's involved in the business trying to make a better board for a customer, being aware of the mental preparation which is a good 75% of selling a board and assuring it's going to be appreciated for a while.
You've got to let him know just what it is you have done to this board that will make it a better board than the one he's been riding.
I am forced by competition to come up with something - new.
That's easy enough to do, but it's got to be above all a better idea or they'll crucify you.
With the multi boardies in Brookvale and the back yarders everywhere there are a lot of ideas flying around.
By in large everybody is on the same trip (a better board will make you more money).
What's better?

Magic in boards is what you can't break down into mathematics or tangible forms.
(For) Example ads. sell you dreams.
Read them carefully they all say the same thing, they all try to bring you their way by appealing to a dream situation or a wish fulfilment.
How many boards are sold because of the intensive add (sic, ad) campaigns.
This extends into the riding and designing, into everything not just boards.
It's an appeal to the ego that suggests you're not quite whole unless you are associated with this thing.

Magic is what you make happen for you but nobody else can feel or experience it.
A good brainwash can do magic.
If you believe strong and long whatever it is can come to pass.
A personal command of yourself can be used in driving the physical you, anywhere you want to go.
Determination, awareness, humility, a very important one.
Unless you are humble you can't learn anything, you have to be teachable and open to new ideas and at the same time know if they are going to apply to you - if not, reject them and go on to another.

Magic is a morning when you wake up and it's going to be right all day and you know it.
Your head is clear the sun shines, your favourite breakfast, no dishes to do, the car starts, is full of gas, tuned up, and your favourite sounds blair (sic, blare) from the twin cones (at the beginning) of the stereo.
When you spot the sea you see a swell and when you arrive there's parking place close by and the (parking) meter is out of order, you've got a new bar of wax and the board is the best you've ever owned.
The wind is glassy to off-shore and a guy up and lays $10.00 on you he's owed for 5 months.
Sand is warm, your favourite people are the only ones in the water and it's perfect and the water's just a little colder than the air. You paddle out and it's a hollow right or left wall and the others are sliding the lefts, you make it out to the line up and the hair is still dry, you're in time for the set of the day and you just know it's coming up ...Man if you pearl blow it on the first wave.
Hang it up you've had more than your quota for the day.

When a guy changes his brand new 6' board for an identical 6'1 and rides it better that's magic.
A new V. W. camper is magic unless you can afford Motels.
A craze in designs creates magic if enough people believe in it, spoons, flex noses, rubber band fins, concaves, round bottoms, 6 inch Vee's - at one time the whole community swore by them - Mass hysteria?
Yes(,) but I am considering for this article anything that's a headtrip, as magic.
Where can it come together, the mental, the physical and the the natural desire for a better, bigger, faster, hotter everything.
Where in (sic, is) surfing anyway?
Why even write about it - the problem is a basic human weakness.
How much is physical, how much is mental?
How much is pre-conditioning, how much is structural?
This depends on all these factors and the particular weight they have on you at the time you are forced to consider them.
But I do feel there was something magical about "BABY".
It was a good board, one of the best boards... Ever?
Maybe. 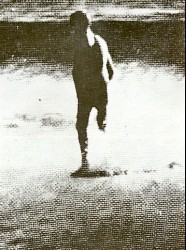 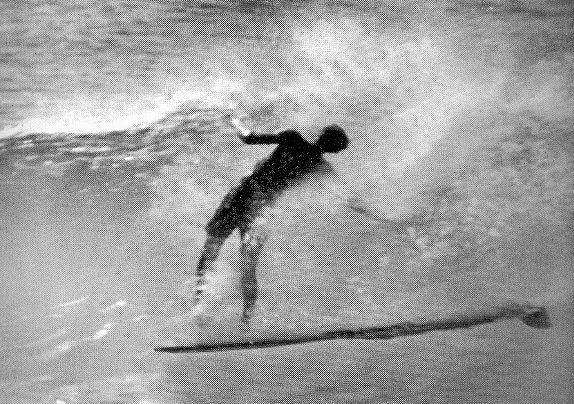