Introduction.
The main focus of this issue is South Africa, recently visited by Evans and Falzon to shoot footage for the upcoming film, The Way We Like It,
heavily promoted throughout.
The articles and photographs demonstrate how fast the trend to shorter boards was established in South Africa, encouraged by visiting surfers such as Tony Wright and Wollongong's John Batcheledore.
Also note the photograph and reference to12 year-old Shaun Tomson, who later had some professional success.
The Newcastle contest was won by local surfer Robert Lynch, for the first time a large number of the top-rated surfers did not attend.
Page 14
Advertisement (full page, black and white): 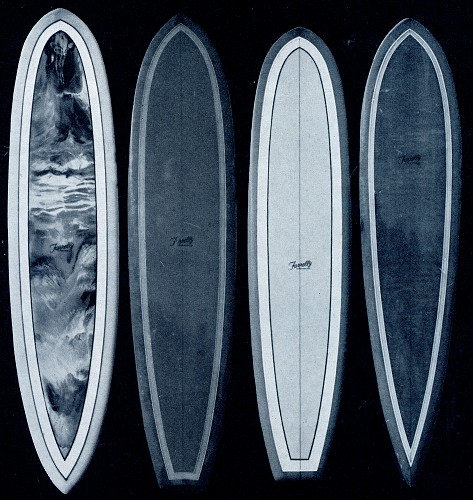 Performance Pintail ... Retaing hot-dog dimensions yet enabling tighter surfing in faster waves.
Speed Squaretail ... The ultimate in speed and forward control obtainable in a squaretail.
Performance Squaretail ... For all general purpose surfing in small to medium wave ranges.
Speed Pintail ... Exhilarating speed combined with the capacity for split-second manouvreing make this machine suitable for the advanced surfer.
(From left to right)

Max Wetteland
Every country has its sporting identities.
The degree of their fame varies with the sport itself and the volume of public acceptance that it inspires.
Along the South African coastline we found that no other surfer was better known than Max Wetteland.
Wetteland first became known to Australians as the South African representative back at the 1964 World Contests at Manly Beach, Sydney.
He also led the South African team to Lima Peru in 1965 and surfed for his country again at San Diego in 1966.
A prominent surf swimmer Max also made the Surf Saving Team to Great Britain back in the mid-sixties.
At thirty years old he is a fine athlete and still one of the best three surfriders in his country.
His flourishing surfboard business in Durbin (sic) is, in our consideration the number one custom shop in the Natal area, and capable of producing surfing units the equal of tbe best produced overseas.
Radio Natal features his daily beach and surf report, and he is regularly quoted in print by the influential Durban dailies.
Max is a rugged individualist, however, we discovered on the crowded beaches of the resort city of Durban and in country areas we visited, Max commands more respect than any other personality we encountered there.
His ability and his examples as a lifeguard and his prowess on a surfboard, which has sharpened, rather than diminished, has established him as a national authority.

ALBY FALZON interviewed Max on the subject of surfboards and design in his country.

Q. Max, why do you feel that the trend is changing from the wide V board to the narrow pintail?

A. Generally the widest part of the board is made one-third from the tail, giving the maximum planing area in this section.
With the pintail we have a complete reversal.
We now have the planing area one-third from the nose, thereby eliminating excess board in front.
Therefore, the major part of the board is now tucked back behind in the curl, where it is most needed to achieve maximum speed.
What's more, the shape of the actual pintail is better suited to the shape of the curl.

Q. In comparing the shape of the "V" to that of the pintail one notices fantastic differences, especially in rail design.
What can you say as regards this?

A. The high and low rail design is actually copied from the Hawaiian big gun.
This means that the rail comes from high in the nose to low in the tail.
This gives us a sharper rail in the tail, which in turn affords us greater planing area.

Q. I notice in your particular board you have a slightly weird combination of "V" and pintail.

A. Actually what I have evolved is a board that I refer to as a V-bottom pintail.
People have asked me what the reason is for the fat "V" nose.
Well, I feel that this enables us to maintain a tighter angle in the wave and simultaneously providing a good planing area in the nose.

Q. Your particular pintail has a rather thick and ugly-looking skeg.
Doesn't this cause a certain amount of drag?

A. To answer your question, one has only to look at nature.
Let us, for example, take the wing of a bird.
Here we have an object, which if one studies closely will be found to have no flat surfaces to create any drag.
I feel that this is what I am striving for, minimum drag anywhere on any part of the board.
My skeg, as you will notice, has no flat sections.

Q. What do you feel about the rapid advancement which has taken place in the last few months?

A. As far as I am concerned there is always room for improvement on anything.
The "V" was a big step, but while advancing many basic principles were forgotten. 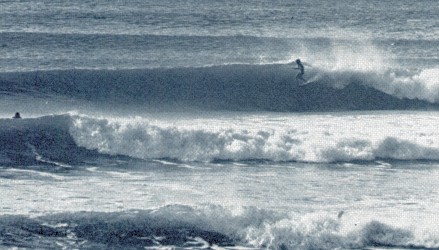 Page 22
...
Within twelve hours the bad weather had passed, and the swell was pumping thru regularly on Noors Kloof Point, with a few sets touching 7 feet and averaging 5 to 6.
The sun came out; the breeze was a steady offshore north/wester at 15 knots.

Loopy Cerf -Tony van der Reuvel, Max Wetteland on their way-out mini-pins, and twelve-year-old Sean on his 5ft. 6in. vee-nosed mini-gun showed their paces, and just how far surfing performance in this country has come in the last couple of years.
The water was crisp at 60°, and apart from a couple of mating whales, plus one curious dark-skinned fisherman from the sandhills, the world was ours alone.
The Indian Ocean stretched empty to the horizon and the mountains rimmed the land, and touched the sky with snowy fingers.
This was the surfing life, the way we like it.

Bob Evans writes on his all new '68 movie production
'The Way We Like It'
Page 29
...
Durban was a familiar  scene- a city on the sea-and we knew about cities on the sea- at last our boards that had just travelled eleven and a half thousand miles , and looked mighty dusty; assumed new importance.
Let; me tell you- Durban Beach with its jetties and break-waters and assorted names:  Bay of Plenty - The Wedge - Dairy Beach - South Beach -  complete with six foot swell and offshore breeze, looked mighty good.

I don't surprise easily- but the scene in the water at South Beach jetty was a real bouncer.
The waves were : alive with radical performers drawing all kinds of crazy tracks on the smallest pintail units we had ever seen.
News travels and surfers hereabouts had got the message and the story was 6' 6" to 7' 0"- fourteen pounds weight and radical as all hell.
In terms of performance and performers- Africa had arrived.
Strangely enough- or logically enough- many of the pressure merchants out there riding were Aussies.

Wollongong's John Batcheledore had just left Africa to return home- but his mate Tony Wright was turning on like he never had at home in Wollongong.
But Max Wetteland and Tony van de Heuvel and "Loopy" Cerf were the surprises- there wasn't a manoeuvre in the book that these African boys weren't pulling off well.

Also just along the beach at a spot called Bay of Plenty (plenty of waves) there was a whole gang of youngsters, ten to fourteen years old, all out there on little five and six foot boards and these kids were really hot.
It seemed that one of them was even hotter than the rest, so we made a point of meeting him.
Not only was he a talented surfer; but he turned out to be a young man of exemplary good manners and happy character.
His name was Shaun Thomson, and he was twelve years old, and his dad was Ern Thomson and a good friend of Max Wetteland.
Ern and Max can honestly be said to be amongst the finest of men over there.