Introduction.
The editorial, Pulps and Pot Surfing Problems by Patrick McNulty, is unreadable in this copy.

Although accredited on the contents page, John Witzig does not get a by-line for his article.

This advertisement by Morey-Pope as a instance where promotion produces an fascinating technical analysis of surfboard rocker, as good as any article of the period.
Integral to the text is the creation of a wave model by the reader, by bending the bottom corner of the page over to a printed mark.
The arrows indicate the graduation in the curve of the wave face, from "top to bottom" Sunset beach to "bearly rideable" Waikiki.
The scale is reproduced here on the right hand side of the page, the dots approximate the relative spacing.
Unfortunately the intended wave model does not take the required shape when the printed mark is used, it should be perhaps higher up the page.

The author appears to avoid any comment on big-wave gun design by noting that, somewhat inaccurately, "the distances between radical changes in the curve of the wave are considerably more than the length of the board."


Page 60
the BLUE MAX the RED BARON & the GREEN HORNET
Battle it Out for Australia's top spot... .
INVOLVEMENT AT BELL'S BEACH 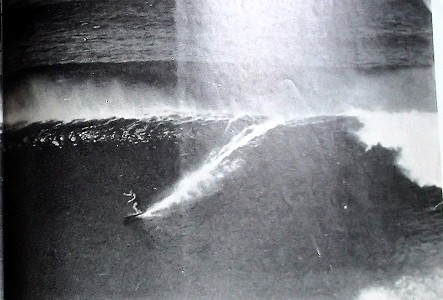 Bob McTavish drops in at Bell's Beach, Australia, for shot two of the sequence turn the page ...
[McTavish did not surf in the contest]

Page 62
Involvement was the name of the game- total involvement- in what may well have been the greatest contest surf of all time.
It was the Red Baron against the Blue Max in a fierce surfing dog fight.
It was consistently beautiful 10- to 15- foot swells crackling with precision explosions off the point at Bells Beach.
It was a great example of the Australian theory of surfing involvement that has raised the sport to a new pinnacle.
It was the Australian National Championships.

Imagine Robert "Nat" Young, the world champion, ripping these beautiful waves in a savage battle with his not-so-friendly rival Bernard "Midget" Farrelly, the first world champion.
And then there was Peter Drouyn finishing with such a rush on the final day's competition that the nine judges had a difficult time sorting out the winners.
But when the final tallies were marked up on the board, it was Nat Young, nicknamed the Blue Max because he was wearing a blue wet suit ,who was in the number one position.
Drouyn was number two, a scant two points ahead of Farrelly, the Red Baron in his red wet suit.

The finalists were Young, Farrelly, Bob Brown, Keith Paul (sic) and Ted Spencer, all from New South Wales; and, of course, the up-and-coming Drouyn, the Queensland and National junior champion, who has moved up to the senior division.
Commented Ray Young, the Aussie team manager:

"Surfers will talk about this final. for a long time, as it fast developed into a real dog fight. .. A new combatant had entered the scene to rival the Red Baron and Blue Max-the Green Hornet, Peter Drouyn, so named after his green wet suit.

"Keith Paul (sic) put on what must have been his best display, and I rated him in the first three.
However, the nine judges did not see it this way.

"After twenty minutes, the pattern was set.
Nat was surfing hard, pulling off some unbelievable stuff, but a lot of this was marred by his "dropping in," and he lost valuable points by this.
Midget again rode safely, occasionally becoming: aggressive, but not enough to get on top."

The fantastic surfing display at Bells Beach underscored why the Australian surfing has so far surpassed the American style. Perhaps one reason is the Aussie boards: they're short (9' to 9'3", fat (22" to 23'') and thin (2 1/2" center razor rails) boards.
But it's the style that makes the difference- the Australians stick close to that curl, and the accent is on the crouch.
In the words of top Australian surf theorist Bob McTavish, "In, around, on top of, and in the curl" is the trade-mark of the great Australian surfing.


The Australian Championships over Easter also showed that the Australians should be in power for a long time- the junior surfers were simply outstanding.
Wayne Lynch of Victoria really had his hands full battling a host of high Australian performers, who all exemplified the total involvement of the Australian surfing scene.
Lynch edged out Butch Cooney, who was handicapped because someone had stolen his surfboard the night before the finals. Third was Kevin Parkinson.

The Australian Championships were set up on the "movable contest" idea that the Australians had seen in action at the World Championships at San Diego last October.
However, as it turned out, the waves at Bells Beach could not be surpassed- many veterans said they were better than anything they'd ever seen in the surfing world, including Sunset Beach in Hawaii.

Both Young and Farrelly- who make no secret of their dislike of each other- had high praise for young Peter Drouyn in their respective surfing columns in Sydney newspapers.

Young, writing in the "Sunday Telegraph," said he was happy that Drouyn had such a good showing "because it proves that there are no biased decisions by our judges and that our judging system is the best in the world.

Photographs: (Above) Nat Young drives across a fabulous glass wall on his way to the Chamionship. Photo: Falzon.
(Below) John "Nipper" Williams plays it tight at Bell's Beach near Melbourne, Australia. Photo: Albert Falzon.

Photographs: (Above) An Australian performer outraces a slick Bell's wall on his way to the Chamionship. Photo: Falzon.
(Below) Butch Cooney bottom turns under the powerful soup. Photo: Falzon.

Farrelly in his column stated:
"Nat Young came away with the first placings in the men's division, and he rode well, impressing the judges with his positioning on the bigger waves, and especially with his maneuvers in the white water.
But for my money, Peter Drouyn stood out for his powerful bottom turns- a dangerous competition maneuver in big surf- and his ability to go through sections inside the waves without grabbing a rail."

Farrelly had nice things to say about the Australian judging system, although he was not as high in praise as was Young.
Commented Farrelly:

"The judging system, although not completely flawless, was a vast improvement over previous competitions.
It's good to see the standard of Australian competition and judging improving."

"The finals of the competition had six top surfers extracting every possible point from each ride.
The competition was so fierce and the standard of riding so high, I found it impossible to separate the placings.

To learn about the exact Slipcheck methods and patterns used to increase the performance of your board; write, enclosing $1, for our paper, "Grip, Lift, and Drag."
Page 4