pods for primates : a catalogue of surfboards in australia since 1900
mctavish on a bit of what's going on
By Bob McTavish
Surfing World magazine August - September1967, pages 33 - 37
Copyright Bob McTavish 1967.
(With additional images) 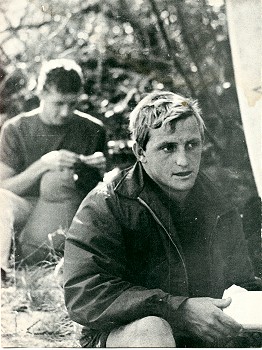 FOR many centuries it was labor (sic.) out, lever around, pick up white mess and lie down.
Hang on to the beach, leap off redwood slab, pound chest and boast.
Then western mind came along.
Longer, more buoyant, straight-offs still, but standing!
Wow!
Western soon slipped along sideways a few times, found it fun.
Remodelling some, soon he was getting hot slides.
He recognised curl.
But the curl he saw was only seen through height and speed eyes.
No steep or hollow.
(an imaginative, but no doubt an incorrect assessment of surfriding technique pre-1900).

Brian (sic, Bob) Simmons said "skeg", and skeg he did.
(The first fin use is usually credited to Tom Blake circa 1935, although Simmons was significantly responsible for it adoption in the late 1940's)
Presto!
Curl digging.
Manoeuvring, sliding, trim.


Thoughts immediately turn to adventurous and exciting surfing.
Use of the concavity, the flat, the up-flow, use of the new beautiful machinery available.

Greenough telling of his board's 110 degrees bank, 20 degrees past vertical - held up in there by centrifugal force.
"Got to Cartwright, solid 6 foot to 8 foot with 10 foot sets.
I was a little worried as to whether I could really turn the Velo SS Mark lI on, as it had been a couple of months since I'd surfed with enough power to reach maximum performance.
Any worries I had were forgotten on the first wave.
My mind and body seemed coupled together.
The wave started out 30 yards above the square, red hot, about 8 feet.
I was bottom turning through a bad section, partly blinded by white water, after this the wave turned into a double, about 6 feet on the square.
After cutting back to set it up, I came off the bottom real hard, about 2 Gs.
Just as I was coming up, spray blinded, it threw on the square.
I was coming up fast, and had to make a very hard turn against the top of the curl.
During the top part of this turn I was almost upside down, looking at the board with the light shining down through the clear bottom.
The centrifugal force was holding me on the board with a force really one 'G!.
Coming out of this, I snap rolled into a bottom turn and got out of there."

At Avalon on those beautiful turning waves - vertical at the top with a good soft curve in the bottom. Midget's been pulling his 8' 8" around in the tightest arcs ever seen done by a full surfboard.
He runs straight off till about three-quarters the way down the face then banks hard standing well forward.
He buries about 8 feet of rail, and his flat under-nose section really pulls the front around fast.
Soft tail and no area skeg offer no resistance, and the back follows, often drifts a little to speed things up.
After the turn he's headed almost straight up the wave.
The recovery cut-back is something else.
Midget's really feeling this turn back to the wall too.
Shoulder cut-backs, then a ram left into the curl, gaining plenty of speed to carry into a deeper turn and out there fast.
Groovy manoeuvre.
Groovy track to try.

Ted Spencer's "throw" off the bottom into the top of the wave while right back in there.
He just whacks the board up in there standing bolt upright and brash.
Cool.
His bounce off powerful white water after into-the-curl- drive ain't bad either.

Some boards being created now have exceptional nose - riding abilities.
The flat under-side ones generally.
They can be trimmed out for great speed on the outside edge of the nose with a little care.
The sensation of grinding across a wall at top speed draped over the tip with your machine pushed up into the wave's face is outasight.
Oth'er machines give fantastic "tracking feelings on the nose, like Bobby Brown in a powerful 6 foot wave up there, with his straight following rail and concave nose giving him a train track or roller coaster guide right through the hollow of the wall, without the old dangers of fin spin or nose pearl. Cutting radical tracks.

All kinds of bitchin manoeuvres are being developed and pulled off allover the place.
The most important single factor in allowing this freedom is equipment.
No.2 is familiarity with the board.
These are three elements involved - Wave - Surfer - Board, Body - Mind and superconscious.
Father, son and holy ghost? (sic.)