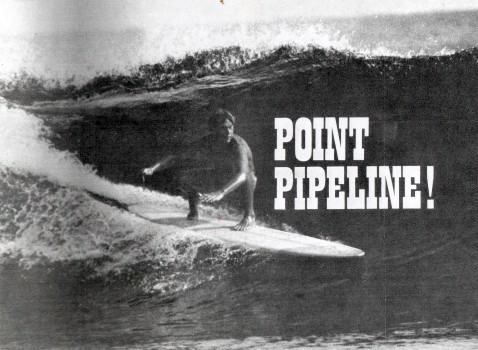 Mick Meir lines up the wall ahead totally unaware of the curl above his head.
Concentration is the keynote in this pic.

Last Easter some Cronulla surfers stumbled upon the best wave any one of them had seen on the South Coast for years.

The spot is the perfect summer surf, with the inevitable nor-easter off-shore, being secluded from the weekend boards.
It is accessible only by four wheel drive vehicles, and a long sharky paddle across a large bay.

The reef is comparable to Hawaii's Pipeline on a smaller scale, although some weekend fishermen have estimated 12 footers breaking on an outer reef.

The inside reef springs up suddenly and the swell lines up and peels off at  about five to six feet.
The oyster infested rock platform is crescent shaped, creating an extremely fast hollow wave.
The ride is predominately a left hander, but an occasional ultra right came through.

As the reef is protected from the open sea, a moderate swell and a high tide is required to bring in the swell and cause it to wrap around the point.
At high tide the water depth varies from five foot at the take off to two inches where you have to flick out or chase your board over an oyster bed.

The typical ride consists of a bottom turn, running to the speed position and then watching the tube peel off above your head.
In this type of surf you do not have to work your insides out to gain the most satisfaction from the wave. 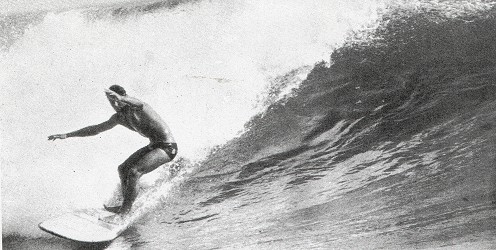 Let's relax fellas, it has been a hard day's surfing.
Steve really shows how as he comes into the beach
in a most relaxed position. 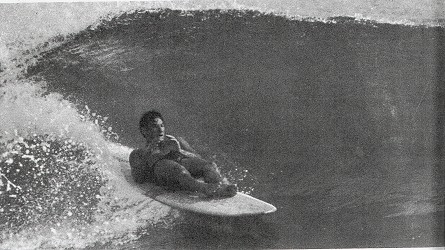 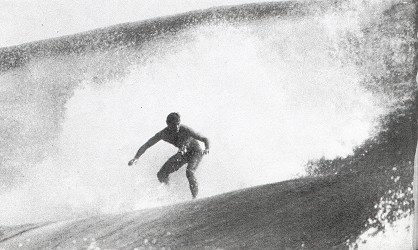