pods for primates: a catatogue of surfboards in australia since 1900
Thomas : Surfboard & Surfski History, Dee Why SLSC, 1962
THE SURFBOARD
Fifty years ago surfboards were almost unknown on Australian beaches.

Travellers returning from America had reported their use at Hawaii, and a few members tried out this method of riding the waves, but usually without success. The boards were made of various kinds of timber and in grotesque sizes. No one ever succeeded in standing on a board.

A Deewhy identity of' the period, "Long Harry" Taylor, made a board resembling an old-fashioned church door, but his efforts in the surf were so futile they became ludicrous.

At the beginning of 1915 the Hawaiian swimmer and Olympic gold medal winner, Duke Paao (sic) Kahanamoku, was in Australia at the invitation of the Australian Amateur Swimming Association.

Staying with friends at a camp at Freshwater, Kahanamoku often rode the waves at that beach, using a solid board, made of sugarpine, about 8 feet long.

Deewhy Club decided to invite Kahanamoku to give an exhibition of board riding at the club's surf carnival on February 6, 1915, but the Amateur Swimming Association, already apprehensive of the new sport of surf bathing, and afraid of losing adherents to stillwater swimming, demanded a fee of £30 for his appearance.

Finding this money was considered by many members to be too big a strain on the young club, and at a general meeting called to consider the matter arguments became bitter and personal. However, two members, T.Moroney and R. Lock, influenced the meeting to pay the money and engage Kahanamoku.

Admission to the carnival was 1/-, and the attendance was so great special trams were run to Deewhy on the newly extended tram- line from Brookvale to Narrabeen.

Kahanamoku gave an outstanding exhibition, often riding waves 12 feet high, and for nearly 150 yards. Beach and surf events were almost overlooked by the huge crowd, as eyes were strained seaward to watch the Hawaiian.

Later in the afternoon, a lady accompanied Kahanamoku and stood on the board with him - a remarkable balancing feat, considering the type of board that was used.

This was the first public exhibition of surfboard riding seen in Australia (?), and it opened the way for the thousands of boards now seen on Australian beaches.

By 1933 the hollow surfboard made its appearance. Speedier and more buoyant than the solid board, it was often used for rescues close to rocks, where it was difficult for a surfboat to go.

However, it was not until 1945 that the S.L.S.A. decided that surfboards could be used officially for rescues.

In 1956 malibu surfboards were introduced to Australia, and from that date their popularity has increased at a phenomenal rate each year. They may yet prove the biggest threat to life-saving clubs since the first club was formed.

In 1960 local government bodies in Sydney decided that malibu boards must be registered at a surf club. A fee of 5/- was charged for registration, but no charge was made on surf club members. Money from registrations at Deewhy was paid into club funds.

THE SURF SKI
The surf ski made its first appearance on Newcastle beaches during the middle 'twenties, and came to Deewhy about 1932.

The type evolved for Australian beaches is a modification of the rapid-riding canoe used by British and Continental canoeists, the main alteration being a sealed top, which is considered an improvement suitable for tre Australian surf.

Towards the end of the 'thirties the double (two-man) ski made its appearance, and proved a valuable adjunct to a surf club's lifesaving equipment. Ski riders contend that a double ski can do everything a surfboat is capable of doing, is better at negotiating rough water, more speedy and, in the event of a capsize, can be righted with little effort.

In 1946 the S.L.S.A. recognised the importance of surf skis by granting championship status to ski races.

Biggest deterrent to the early popularity of surf skis had been the cost, which had to be borne by those individuals favouring this type of wave riding.

Now the malibu board is threatening the use of skis in the same way as they had decreased the popularity of the long, hollow surfboard. However, surf skis received a boost by the inclusion of kayak racing at the 1948, Olympic Games. At the Melbourne 1956 Games two surf ski riders were placed in the final of the kayak event, a remarkable feat when it is realised that there are nearly eight million registered canoeists in Europe alone.

At the end of the 1961-62 s'eason, two single skis and one double ski were owned by Deewhy Club members. 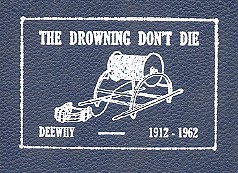