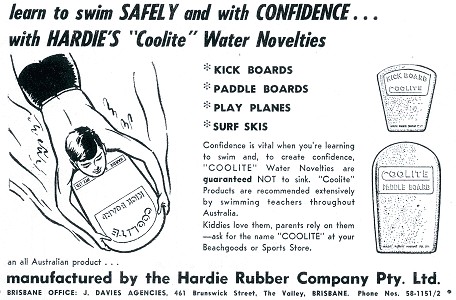 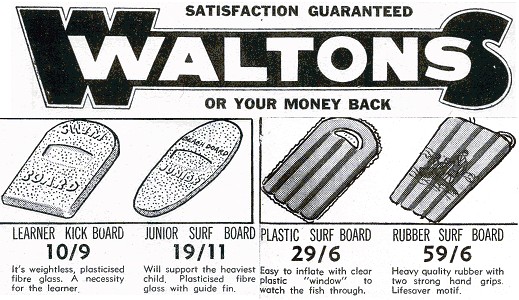 Page 20
YOU TOO CAN SHOOT
By JOHN MORTON
SUMMER and sunshine see Queenslanders flocking to the beaches.
Sand and surf provide one of our favorite pastimes.

And how much more enjoyable it is for those who can ride a wave!

Mr. E. J. Smith, super-intendent of the Point Danger Branch of the Surf Life- saving Association and Valley club amateur swimming coach, has helped us to tell you how to catch that wave.

The surfer should be positioned just beyond where the waves are breaking.
The principles involved in catching various types of waves are divided into sections.

If the wave is not particularly large - up to about four feet high - and breaking on a sand bank, stand in the water about two yards from where the wave will break.
Pick out the wave which is rolling evenly.
Move towards the beach and as the wave begins to break. push forward from the feet.
The body should be held straight but not too stiffly.
The arms should be directly in front and fully extended with the hands close together; the head
should be down between the arms; the toes should be pointed.
If the head is held up, the body will tend to fall back and the wave will be missed.

As the surfer becomes more proficient, the head can be turned to the side as in normal swimming and a quick breath will help a t longer run on the wave.
The legs can be used as in freestyle swimming to help keep the body in the front of the wave and to ride the wave until it is spent.

The art of riding a wave for a long distance can be improved by greater breath control and better control of the legs to give body balance.
A breath can be obtained with a swift pull under the water with the right hand through to the right side of the body as in freestyle and with the head turning to the right side.
The eyes should be just clear of the water as the mouth takes in the oxygen.
The left-hand is held fully forward for balance and the legs kicked rapidly to keep up with the speed of the wave.
Several breaths can be t taken in this manner.
The arms and head actions are reversed if the breath can be taken more comfortably on the left side.

After the first step has been mastered and the surfer feels confident to catch a wave by swimming on to it, another stage can be attempted.
Push off, take one or two arm strokes to try to match the speed of the wave until the force of the breaker can be felt and the run of the wave carries the body forward.
The arms can be brought to the sides while the surfer is going down the face of the wave in what is  termed "green water."
The head may be held just above the surface with the shoulders drawn forward to help the body gravity to be as far forward as possible.
This position can be held until it is felt that the wave may be lost; when this happens, the hands should be moved in to the forward position.

When these methods have been practised sufficiently, the surfer will be ready to try deep water.
This should be on the high tide.
Take up a position just beyond the breakers, choose an evenly-rolling wave and a likely-looking swell, and swim at full speed to where the wave will break.
The swimming action begins with a strong kick, and the overarm stroke is used to reach the speed of the wave.
About six strokes should be sufficient to take the surfer to a position where the wave takes charge.
The previously-practised method then comes into operation.

Points to remember are:
*The speed of the body should be approximately the same as the wave in the early stages.
*Before ceasing to swim. the surfer must feel that the wave is taking a forward direction towards the beach.
*Correct balance when the body weight is concentrated forward except when riding down the front of a steep wave.
The art of surfing is not difficult.
It can be mastered after practice so that the breaker can be ridden to its fullest extent.

Page 28
Page 29
IT'S A GREAT THRILL
Few sports can provide more tingling excitement than
riding a mighty wave on a surf board or surf ski.

The new and popular Okanui surf board, seven to 10 feet long and weighing from 20 to 30 lb., must be waxed before use to stop the feet slipping.
Here is some advice for the Okanui board learner from Queensland and inter-State champion, Ken Swan, of North Burleigh Club:

Begin in a small or rolling surf.
The learner should paddle out lying down, using his hands as paddles alternately.
After having graduated from the learning stage, he can paddle out kneeling and using both hands at the same time.

He should be positioned slightly to the rear of the board so that more of the front of the board than the back is out of the water.
If a large wave should come, sit up, wrap legs and arms around the board and turn the board over to prevent being dislodged.

The board should be taken out about 10 to 15 yards farther than a surfer would I wait for a wave - some 30 yards past where the waves are breaking.
The best ride will be on a green wave.
Lie or kneel on the board - kneeling is better because you obtain more speed.
Kneeling is a matter of practice to get balance.

Pick a wave about three away.
Paddle at top speed towards the beach.
Spring to your feet as quickly as possible when you feel the wave picking you up and shooting you down the front.
The back foot should be almost at right angles across the board and the front foot about a foot away with the toes pointing ahead.

Make sure the nose of the board is out of the water.
The board can be turned by throwing the weight on the back foot.
Arms will help balance.
It is like walking along a fence.

Push the ski into knee-deep water.
Sit in the middle of the ski with the legs forward and knees slightly bent.
The feet fit into straps.
Paddle the ski as you would a canoe.

Begin in a small or medium surf.
When you have paddled far enough out, turn the ski to face the beach.
Wait for a suitable wave and try to catch it before it breaks.

Begin paddling when the wave is 20 to 25 feet away.
Paddle as fast as you can.
When you feel the ski running by itself down the front of the wave, stop paddling.
Release your feet and slide quickly, 1ft. 6in. to 2ft., towards the back of the ski.
Balance yourself and keep the ski straight.
Use the paddle to straighten the ski if necessary or straighten it by leaning to the side as you would on a bicycle.

Don't go out in a heavy surf while learning.
When you first pick up the wave move fast towards the rear of the ski.
The beginner should start on the shorter ski - a 16 footer - which is wider, more stable and easier to handle.