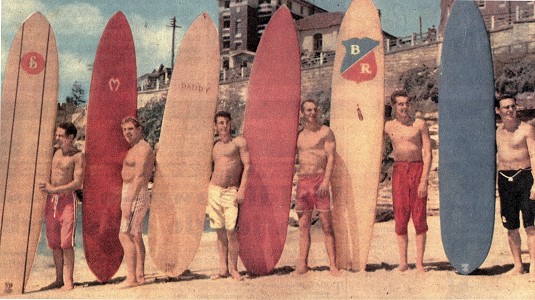 Hot doggers' of the surf.

By leaving behind balsa-wood surfboards after a 1956-57 visit to Sydney, a Hawaiian surf team helped to add a new expression - hot doggin' - to Australian beaches.
In line on South Bondi Beach are members of the South Bondi Board Club.
From left are Scott Dillon, "Bluey" Mayes, Andy Cochran, Rod Cartlidge, Barry Ross, and Des Price. Some wear long pants, and have foam rubber built into the knees, to protect their legs, especially when paddling their surfboards out to catch a wave.
Hot doggin' is manoeuvring a surfboard at high speed,
The Hawaiian boards were 20 lb. lighter and 6ft. shorter than the type then used in Australia.
On a big wave they could reach speeds of more than 50 miles an hour - 20 miles an hour faster than Australiain boards.
Thrilling to the pace of the balsa surfboards, Sydney swimmers went on to try other materials, using new lighter synthetics for greater speed and easier handling.
Hot doggin' now provides thrills for 500 surfers in Sydney alone.
To cater for them, the Surf Life Saving Association is to add a surfboard-riding contest to carnival progammes.
In surfboard riders' jargon the event will be a hot dog meet.
lt will differ from surfboard races.
Contestants will be judged on ability in riding the waves, not on paddling power.
Three experts will judge each event for style, daring and "walking the plank' - walking as far as 8ft. to
the front of the board for speed and to the back for fast turning.
Instead of riding the wave straight to the beach, contestants will move in all directions, do reverse turns, trying to out hot dog each other.
Because of the popularity of hot dog meets on Hawaiian and Californian beaches, action films of expert board-riders are big business in the United States.
Two Californian surfboard manufacturers recently spent nearly £3000 on photographic equipment and paid all expenses for three of California's best surfers to go to Hawaii for a three-month film-making trip.
Brilliant surfer Bud Browne, of Honolulu, financed a trip around the world with two exciting 50-minute films taken on Hawaiian beaches.
On this trip Browne realised an ambition - to surf in the choppy, cold water of the Bay of Biscay.
Hollywood is to make a film with a surfboard theme, based on an American best- seller, "Gidget," written by Californian journalist Frederick Kohler.
Introduced to a number of surfboard riders by his daughter, Mr. Kohler liked their philosophy and jargon.
He called his book "Gidget," meaning girl midget, the surfers' nickname for his daughter. 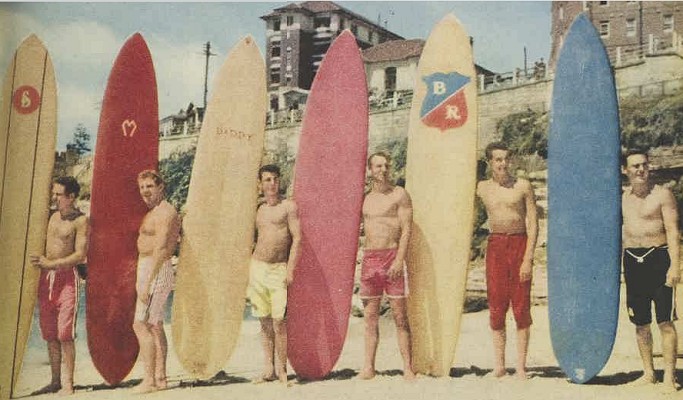