pods for primates : a catatogue of surfboards in australia since 1900
1953 Solarbo Balsa Boards - English solid wood prone boards.
This advertisement appears in
Funnell, Ronald S.: The Art of Surf-Riding on the Cornish Coast
A. Wheaton and Co. Ltd
Soft cover, 36 pages, 9 black and white photographs.

An instructional pamplet-like publication that extolls the virtues and dangers of surf-riding - in this case prone riding on narrow solid wood boards as illustrated by the cover.
It  is believed to be the first instructional surfing book published in Britain.

Includes several advertisments for Newquay businesses and for "The New SOLARBO BALSA BOARDS".
It is probable that the advertising was either updated for or, more likely, added to the 1953 edition. 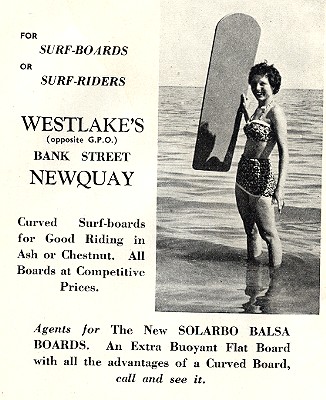