surfresearch.com.au
Fredrick O'Brien :  Surf Riding in the Marquesas, 1922.
Extracts and a photograph from:
O'Brien, Frederick:
Atolls of the Sun
McClelland, Toronto, 1922.

Introduction.
Fredrick O'Brien was a popular author, writing many books with Pacific themes.
He had previously written about surf-riding in the Marquesas in White Shadows in the South Seas (1919), and some of the characters reappear here.

It is not always clear to what extent his stories are based on personal observation, and what has been borrowed from other authors
In this instance, on pages 314-315 he describes canoe-leaping (ele wa'a), in which the surfer leaped off the canoe with his board and rode the crest of a wave ashore.
This was singularly reported by John Papa Ii (1870, page133), however, its is somewhat diminished by his contention that the canoe slid back of the wave because of the force of the shove given it with the feet.

The photograph of a Samoan canoe being ridden over a reef (facing page 113) is very rare.

Once more the Flying Fish towed the boat very near to the beach, and at the cry of "Let go!" flung away the rope's end and left us to the oars.
The passage through the reef of Anaa was not like that of Niau.
There was no pit, but a mere depression in the rocks, and it took the nicest manceuvering to send the boat in the exact spot.
As we approached, the huge boulders lowered upon us, threatening to smash us to pieces, and we backed water and waited for the psychological moment.
The surf was strong, rolling seven or eight feet

high, and crashing on the stone with a menacing roar, but the boat-steerer wore a smile as he shouted, "Tamau te paina!"

The oars lurched forward in the water, the boat rose on the wave, and onward we surged; over the reef, scraping a little, avoiding the great rocks by inches almost, and into milder water.
The sailors leaped out, and with the next wave pulled the boat against the smoother strand; but it was all coral, all rough and all dangerous, and I considered well the situation before leaving the boat.
I got out in two feet of water and raced the next breaker to the higher beach, my camera tied on my head. 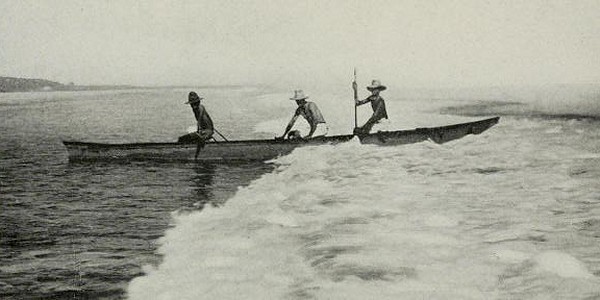 Over the reef in a canoe.

When I was settled in the House of the Golden Bed, as the Marquesans called the cabin I had rented from

Apporo, the wife of Great Fern, in exchange for my brass bed at my departure, I went almost every day with Exploding Eggs to the beach to fish or swim or to ride the surf on a board.
The road wended from my house past the garden of the palace and thence to the sea.

There was no one on the veranda of the palace.
Except for the residence of the lepers by the cemetery there was no other house toward the beach but that of my enemy.

Obscure under the heavy-leaved palms, I could not be sure that Peyral was not ensconced on his gallery with a bottle of absinthe and a shotgun or rifle waiting to pot-shot me.
He knew my habit of bathing every day, and maybe was chuckling over scaring me from the spot.
I walked boldly and briskly past his house.
There was no figure on the porch but that of a girl.
I glimpsed her only, for an emotion of shame — inexplicable shame — directed my eyes away from her.
I continued on to the water, and, hiding my revolver in the trailing pahue with its morning-glory blossoms, I took up my surf- board and forgot Peyral in that most exhilarating of sports.

Exploding Eggs dragged his tiny canoe from the bushes, and we launched it and pushed it through the surf.
With rare dexterity he paddled it seaward, I with my board on my knees, a calm admirer of his marvelous control of the little craft: he and it the first Marquesan and the first canoe I had seen in this archipelago.
When we were out half a mile or so we lay still for the right breaker.
He watched and after a few minutes began to paddle with intense energy until the wave caught him.
We swung to its crest and clung there as we dashed in at a fast pace without motion on our part.
But, when half-way, Exploding Eggs took my board from me, and, handing me the paddle, he suddenly plunged with it from the canoe and, extended full

on the board in rhythm with the billow I rode, accompanied me to shore.

Before noon, I was overcome by a longing to see Atuona again.
The voices of the friends who had chanted their grief were in my ears.
I landed at Tahauku in one of the copra boats which were coming and going, and walked along the cliffs until I came within sight of the beach where, so often, I had ridden the surf.
I went at a fast pace down the hill, hoping for a familiar face.
At a point overlooking the cove, that very spot Stevenson thought the most beautiful on earth, I heard shouts and merry laughter.