Introduction.
Fisher visited Kaui, where he swam and saw blow-holes, and Ohau where he hired and surfboard and rode, possibly prone, the waves at Waikiki. Page 26
We stopped on the seashore for our lunch, for which I had purchased bananas, pineapples and cocoanuts at the places where they were grown.
From  this spot we had a wonderful view of the cloud-capped mountains, with perpendicular walls and sharp peaks on our left and with the ever changing ocean on our right.
We then followed down the winding road crossing narrow valleys, which reached up into the flanks of the picturesque mountains, then down again through the cane fields of Waialua plantation.
At the foot of the mountains on the western sea, we suddenly came upon the pretty little village of Waialua, where we spent a delightful hour surf bathing, with the setting sun displaying a gorgeous tropical sun-

Page 27
set over the waters of the blue Pacific.
We returned  through Waialua plantation and were soon back on the Lilehua Plains, which are covered with the entangled lantana, and on to Schofield Barracks.

[on Kauai]
Leaving the main road at Koloa, I spent a delightful night on the seashore and after a dip in the surf.
I had a splendid sleep on a bed of pine needles on the volcanic rock near the Spouting Horn, which is a curious rock formation where the waves
rush into lava tubes and force the water high up into the air in geyser fashion.

Of my six months in seeing Uncle Sam's new territory, four of them were wonderfully spent on the Island of Oahu, in and around Honolulu.
The world famed surf-riding at Waikiki Beach, was delightfully enjoyed many times on a surf board of beautiful Hawaiian mahogany.
With the temperature of the air at about 70 degrees, I would push and

tow my rented board from the sandy beach while the cocoanut palms, so slender and graceful, seemed to watch as I, with natives and tourists, swam out to sea and then rode back on the incoming surf.
Sometimes I was riding the board and other times it was riding me, but it was grand mid-winter sport in a land where the meaning of the word winter is unknown. 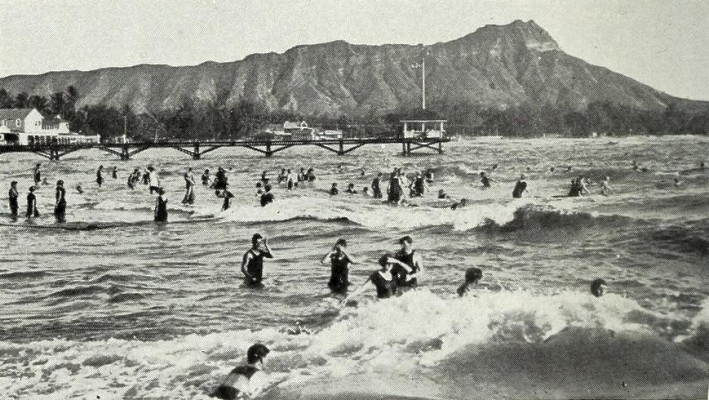 The native Hawaiians easily become splendid swimmers.
However, surf-riding has developed expert riders from the ranks of visitors.
The temperature of the water at the beaches permits bathing every month in the year.