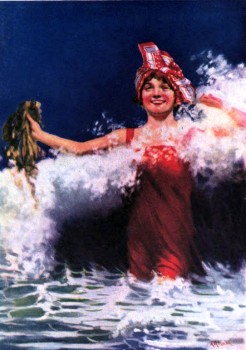 MY word, she can travel!
I wonder how she will take the turn?
Round she goes, right on her heel, the beauty!
What wouldn't I give to have a flyer like her?"

The boy, whose enthusiasm had been aroused by the boat's splendid performance, gave a sigh.
"No such luck for me," he said, turning to his chum.
"I'll have to be content with a little one-horse two-stroke for the birthday present Dad promised me if I pulled off the Double-Dux of the School and All Schools' Swimming Championship.
Well, I collared them both, and as Dad never breaks his word, I bet it's the little one-horse for me to-morrow."

Ned Grattan, the speaker, like his chum, Jim Stanley, was an Australian boy.
Born of an Irish father and an English mother, he inherited the characteristics of both races, being warm-hearted, quick-tempered, and ever ready to forget an injury.
He had grit and determination written on his face, and strength in every action of his body. Tanned brown, only a few shades lighter than an Islander,

from exposure to the sun of the beaches, he was, and looked no different from thousands of other Australian boys of sixteen, who, living in the open air, leading clean and healthy lives, become at this early age strong, well developed, mentally and physically, and capable of holding their own and a little more against all comers.
Ned Grattan could ride a surf-board like an Islander, although only a few weeks had elapsed since the first exhibition of surf-board riding had been given by Khanamaku (sic), the world's fastest swimmer. Ned was not the only boy who had mastered the surf-board.
Before the summer had ended, the ocean rollers were ridden as they had never been ridden before, and the great white horses
of the old Pacific shook their manes and raced shoreward with sun-brown surfers, riding them all out to a finish.
Gallant deeds and actions of self-sacrifice were so frequently performed that the saving of life, or lives, from the treacherous undertow went un-rewarded and unnoticed except, perhaps, for a clasp of the hand and a heartfelt "Thank you" from the
rescued.
It became a point of honour never to mention a risk taken, and a surfer who was unfortunate enough to receive a medal for a gallant action carefully hid it away and kept 'mum.'
Such was the calibre of the boys of the beaches, the crews of the famous eighteen-footers and the average clean, sport-loving Australian, Ned Grattan

and Jim Stanley were not exceptions; they were typical examples of Australia's budding manhood.


AFTER the departure of the stranger from the camp, Ned and Jim put in their time in a way that suited them admirably.
They unearthed the surf-board that Old Ned had cached, and during the afternoon they frolicked to their hearts' content in the breakers.
Andy's instructions were to come straight to the boys, and so, on his arrival at thcamp, finding it deserted, he made his way to the beach, where the stranger had told him he would probably find the boys if they were not at the camp.
As he topped the sandhill an extraordinary sight met his gaze.
To make sure he was not dreaming, he rubbed his eyes.
Andy had never seen surf-board riding, and the phenomena which he witnessed made him uncertain as to the state of his mental
faculties.
To those who have never ridden these white-maned horses of the old Pacific the joys of the surfer can never be known.
The first mad rush, the lightning drop with outstretched arms from crest to surge, as rapid as the dive of a seagull, the

swirling rush shoreward, the rider, face aglow, with a shake of his body like that of a water spaniel, again turning seaward looking for fresh conquests, spurning the weaklings, choosing only the mightiest of ocean monarchs as fit steeds for his pleasure!
Ned and Jim had just topped a lovely roller as Andy appeared on the scene.
They had swum out with their board fully three hundred yards, and waited until the exact moment when an ocean giant, making its mad rush upon the great barrier of sparkling sands, arched his great white neck, and then with spreading mane hurled himself at the shore, the hoary-headed old racer having travelled across leagues of ocean to match his strength against Australia's coast. The boys had caught the giant when his fury was about to break, and, rising with their surf-board, they had slid with a few vigorous kicks down the mountainside of water— a long break and a clean break, and they were riding full and square.
"Try a double," yelled Ned.
Then Andy witnessed an amazing spectacle.
The surf-board was lost in the smother of spume, but two figures could be seen three hundred yards away, standing upon their heads on a great white breaker that was racing shoreward at forty miles an hour.
Andy was amazed.
His thoughts went back to a miracle that he had read about when a boy at Sunday School.

The same miracle was happening right before his eyes, only everything was upside down.
Fortunately for Andy's peace of mind it took only seconds for the riders to reach the shore, and then he breathed freely again.
He had not been witnessing anything supernatural, as was clear to him, when he saw Ned and Jim resume upright positions, and land their surf-board on the beach.