MANUFACTURER HISTORY
Ron Wade shaped for several Brookvale surfboard companies before staring his own label around 1968 at Mona Vale.
Other Ron Wade Surfboards

DESIGN HISTORY
Originally based on a spooned deck balsa wood kneeboard, the Greenough Flex Spoon (Velo 1) was molded off the bottom and then had foam block rails added.
This construction method was not followed by other manufacturers - a full blank was shaped with a thin foam base that was removed after laminating the bottom.
First used in Australia in 1965, George Greenough's performance had a huge impact on many Australian designers.

The design was given exposure in the surf media as was George Greenough's surfing and surf photography.
Many manufacturers made copies of the design and the intensive glassing requirements required a premium price.
The most recognised models were produced by at Hayden Surfboards Caloundra Queensland, featuring Greenough's dramatic Fighter Plane decal, see below.

The design peaked in popularity around 1970 with the release of George Greenough's The Innermost Limits of Pure Fun  -  featuring some his surfing on Spoon and inflatable mat (see #66) but most famously included on-board footage of radical performance surfing and serious tube rides.
Because the high performance capabilities of the design were only achievable in quality waves and the low floatation meant that only the most fit riders were able to catch waves, by 1973 the design was largely supplanted by Peter Crawford's Slab design, circa 1969, see # 83.

Initially Peter Crawford simply filled in the spooned deck to greatly increase floatation and expand the wave range, but over a long life the Slab was apadpted with a range of rail shapes and fin configerations, see # 58.
In the USA the Fish was a notable alternative in kneeboard design.

Greenough's extreme design was attempted to be recreated in stand up boards, most infamously by Nat Young at Gordon Woods Surfboards in 1965, see The Nautilas.
Although this board was a failure, George Greenough's fin design was to have a huge impact on Australian surfboards and by 1968 almost every fin bore some relationship to Greenough's high apsect template.

In 1967 Midget Farrelly, Bob McTavish and other shapers in Sydney developed a short deep vee bottomed board that had strong elements of George Greenough's influence, see # 26.

REFERENCES
See Paipo Catalogue for other Kneeboards
For more on spoons see www.flexspoon.com
Magazines
Popular Science magazine
"Far Out Flexible Surfboard... the wave of the future" by Eric Blum as told to Al Lees
August 1969 pages 92 to 95. 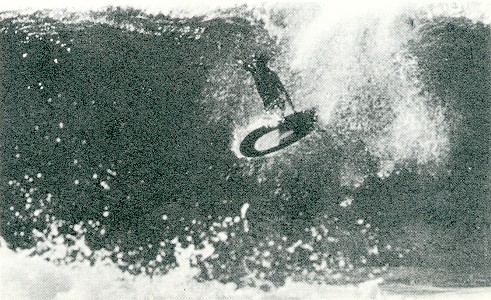 George Greenough - North coast freefall 1965.
Photograph by Tanya Binning
First published Surfing World Vol ? No? 196?
This cropped version from Margan and Finney , page 310
The most outstanding photograph of committed high performance surfing up to this date, this level of performance was probably not achieved by stand up surfers for another ten years..