pods for primates: a catalogue of surfboards in australia since 1900
balsa, 1958 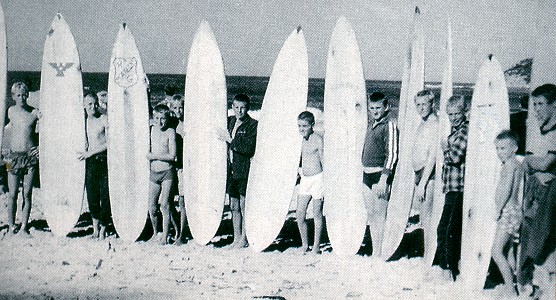 Junior Surfers, Manly 1958.
Centre/Jacket : Sugar Ray Robinson. Right/Checked Shirt : Midget Farrelly
Early printing : Surfboard Designs in Modern World magazine
July 1971 pages 30 - 37. Editor: Dick Levine
Reprinted in Nat History, 1983, page 89. Photograph : Snowy McAlister
1961-1962
At the start of the season a visit to the area by members of the South Bondi Boardriders Club [many of whom were members of the Bondi SLSC], was to have ramifications to the local area.
Some members of the Mollymook SLSC had at the end of 1960, locally pioneered surf board riding, using malibus.
They had been able to combine both surfing and surf lifesaving without any problems.
Bob Evans, Ian Hunter, Bob Davidson, Peter Williams and Ivan Johnson were the first, and many of the younger club members over the next few seasons followed on.
The visit of the surfers from other areas like Bondi on 'surfaris' seeking out new, unspoiled waves, introduced the youth to a new culture that did not include surf lifesaving in the equation.
Basically it meant a competition in coastal areas for the pool of local youth which has continued on ever since. 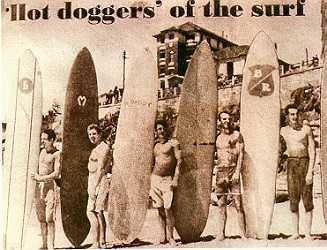