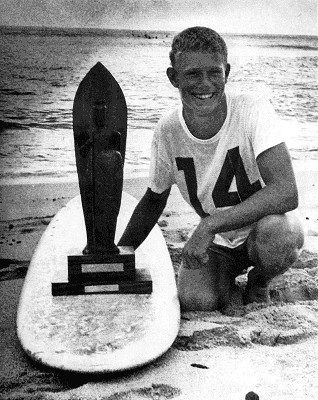 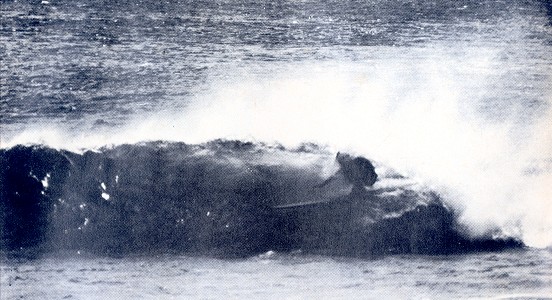 Sun-Herald circa November1963 'Young World'
Midget Farrelly: "Learn to master the turn", one in a series called "SURFING with Midget Farrelly " .
There is a small article on the Australian surf team at the Makaha International Surfing Championship.
"Bob Boot of Mona Vale was the first of the Australians to ride the Famous Waimea Bay".
Surfing World Volume 3 Number 1, September 1963, page 3.

1963:  Immigration - Mr Hubert Opperman, was appointed Minister for Immigration in December 1963. He was a world cycling champion in the 1920's and 1930's and served in the Royal Australian Air Force during WW II. Hubert with his son, Ian, at Torquay, Vic. Ian is a keen surfboard rider
NAA: A12111
Scott Dillon Surfboards
Surfabout, Vol.2 , No. 7 1964 Cover
Bob Pike is on in the cover shot.
Scott Dillon is reported as noting the board "was a balsa wood gun shaped in Hawaii for Bob Pike by Pat Curren.
This is the board that all subsequent Scott Dillon Point Break Models were modeled from"
The board is a Surfboards Hawaii, also possibly shaped by Dick Brewer.
See ASM, Manly SLSC. Keyo Surfboards
Gordon Woods Surfboards: loading boards for Hawaii
[Rick Griffins'] Murphy the Surfie t-shirt
George Rice and VicTantau Surfboards
Norm Casey Surfboards
Scott Dillion Surfboards: photographs of Scott at Sunset, Haleiwa, and Makaha Point.
Sun-Herald  May 10 1964  'Young World' section
Overview of the judging system and how points are to be allocated for the first World Surfing titles to be held at Manly. Phil Edwards and Buzzy Trent listed among the 7 judges . 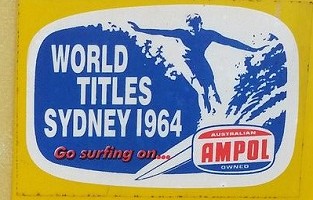 surfresearch.com.au
circa October 1963:
Although Joan tended to stay close to Bob when he finished his day's work, Dylan and Farina found some time to tryout the California experience together.
Shortly after Bob arrived, Richard showed him Joan's Vespa motorcycle, and they went through the male ritual of inspecting the bike, pacing around the machine, and handling random parts decorously.
Farina, who had ridden other people's bikes a few times in Europe, was a novice rider but critical of Dylan's ability.
"He would play around with that motorcycle," Farina said, "but he really could not drive."
Mimi and Joan watched from Joan's window as the men took turns spinning down Corona Road, wondering which one would crash first.
"Neither of them knew what he was doing, really," said Mimi, "and they got on those things and thought they were Marlon Brando.
"Apparently looking for another hot-dogging opportunity for which they were equally ill prepared, they borrowed a Carmel neighbor's surfboard one night in early October and went moonlight surfing alone.
"I remember that he had written 'Lay Down Your Weary Tune' at Carmel," Farina later said.
"One evening, we were out surfing with a surfboard, and he rode the motorcycle back and wrote the tune.
I remember that because [Joan] was on her way to do a concert at the Hollywood Bowl, and he was very keen that she should sing it with him.
But she was unsure of the song and the words and didn't want to do it yet."