pods for primates : a catatogue of surfboards in australia since 1900
Agnes Gardner King  :  Surf-Riding in Honolulu, 1921.
Extract and illustration from
King, Anges Gardner:
Islands Far Away
Illustrations by the author.
Sifton, Praed and Co., London,1921.
2nd edition.


Introduction.
This reference was identified by Herve Magnificat, and posted on The Surf Blurb, 4 June 2013.
He noted (edited):
"Agnes Gardner King was an illustrator.
Maybe she used this postcard from the 1920s for painting her image of surfing, changing the stance of the surfer on the nose.":

The postcard is reproduced below.

Cousins who live in Honolulu took charge of us for the day, which was all too short for what was to be seen.
We first spent some time watching the surf roll in.
The blue green of the sea resolves itself into pure white as the huge waves curl and break in endless succession, while the natives ride over their crests on planks.
They balance themselves in the most wonderful manner, often even standing on the planks.
It looks very dangerous, but they can all swim, and they are very skilful, having begun to learn this pastime when they were tiny children. 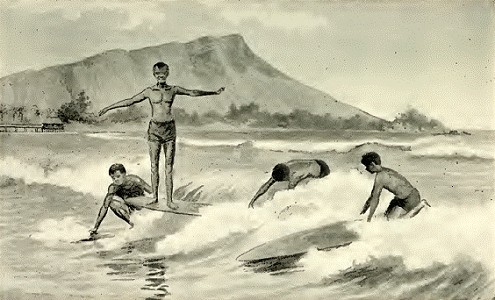 Herve Magnificat posted this image of a hand-coloured postcard to compare with the illustration by King.
He noted "Maybe she used this postcard from the 1920s for painting her image of surfing, changing the stance of the surfer on the nose.":

There is a clear similarity to the postcard, King has essentially adjusted the action, with somwhat surprising results, against a more dominant Diamond Head.
Notably, she has inverted the upright surfer, on the left, who is performing a head-stand,  to a standing rider with outstretched arms.
The head-stand was considered the ultimate demonstration of style in the period, and this is probably one of the earliest photographs of the manourve.
His board is largely obscured by its wake and the foam, while the prominant long board is being ridden by the kneeling centre-rider in yellow.
The nose-riding surfer is an abberation, resulting from King's misreading of the photograph and placeing her standing rider on the nose of another rider's board.
This advanced manourve would not be documented until the1950s, and only became common after the introduction of fibreglassed surfboards with fins.